UK horseman William Haggas did it again taking out the 2021 NE Manion Cup on Slipper Day for the second year in a row, this time with English raider Favorite Moon – new favourite for the Group 1 $2 million Sydney Cup (3200m) in a fortnight’s time. 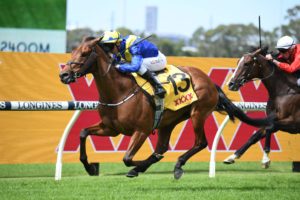 Last Sydney Autumn Racing Carnival the Newmarket-based Haggas won the Group 3 $160,000 N E Manion Cup (2400m) at Rosehill Gardens with Young Rascal who went on to finish seventh to Etah James in the Sydney Cup during ‘The Championships’ at Royal Randwick.

This year he returned and stole the show with thanks to a gun ride by Kerrin McEvoy who guided Sea The Moon gelding Favorite Moon to a tidy win off an on-speed performance in the traditional Sydney Cup lead-up.

Racing as a four-year-old in Australia, Favorite Moon settled into a lovely position third the fence as the Gai Waterhouse & Adrian Bott-trained Hush Writer led the NE Manion Cup field around at pace.

Last year’s ATC Derby winner Quick Thinker settled second after getting away well from the gates, while stablemate to the front runner Sacramento was positioned fourth with cover.

Nash Rawiller looked to steal the show and go all-the-way aboard Hush Writer who got out to a big lead, upping the tempo at the 1400m and then again with 1000m to go after Skymax pushed forward to move into second on the outside.

Deep throughout unable to get any cover during a luckless run just off the leading pack was the progressive Anthony & Sam Freedman-trained So You Think mare Real Of Flowers, runner-up in last November’s Listed Sandown Cup (3200m) over the two miles.

With 700m left to travel, Hush Writer beat off Skymax and drew four lengths clear at the top of the straight looking like he was going to pinch victory.

Favorite Moon however was quickly on the scene giving chase, roping in the leader and laying it down to Hush Writer who he got ahead of at the 100m and held on to secure the victory and spot in the Sydney Cup field on April 17th.

A half-length back in second was Real Of Flowers who covered ground the whole trip before powering home late in a huge Sydney Cup trial with legitimate excuses for not winning.

Sacramento then rounded out the trifecta battling on well for third just ahead of Hush Writer in fourth.

Taking no honours away from the winner however, Favorite Moon was terrific first-up over the 2400m and looking a big chance over further next start.

“When they win like that it makes it all worth it,” Haggas’ stable representative Isabella Paul told Thoroughbred Central post-race.

“He’s really come into his own down here. The one-on-one attention has really suited him.

“Obviously we’re over the moon, pardon the pun!

“It was a great ride. Fantastic.

“He should be better over a little bit further. We’ll talk to the boss and see what he wants to do next.”

All-in Sydney Cup 2021 betting at Ladbrokes.com.au on the N E Manion Cup winner Favorite Moon have firmed in from $12 to $6 favoritism, while the eye-catching runner-up Real Of Flowers has been slashed from $12 into $7 with full markets available here.