After winning on debut over the same track and trip last month, the daughter of Street Boss showed enormous progress coming off a freshen-up in another dominant display as the short-priced favourite.

Much like her debut win, a patient ride from Damian Lane proved the trick as the champion jock produced her from a four-wide position down the straight to race clear over the final 100m. 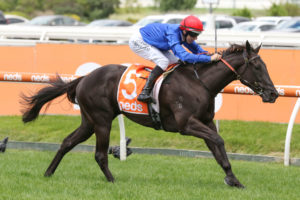 Arcaded has firmed on to the third line of betting ahead of the Neds Blue Diamond Stakes at Caulfield on February 20. Photo: Ultimate Racing Photos.

Bred for speed, Arcaded’s outstanding turn of foot was too much for the front-runner Scorched Earth over the concluding stages, an encouraging sign as she steps out over further in the $1.5 million Group 1 Neds Blue Diamond Stakes (1200m) at Caulfield in a fortnight’s time.

Arcaded was one of three Godolphin fillies lining up on Saturday alongside stablemate Picarones, who hit the line well for fourth.

“Once again Damian just got a lovely rhythm and flow through the race with this filly, so he was able to unleash that punch that she has, and she put them away in good style,” Godolphin stable representative Sean Keogh said of Arcaded’s efforts.

When asked on the step up to the 1200m, Keogh was undeniably confident.

“That’s two starts and two wins now. She’s a really good filly and there’s no doubts in our mind at the moment.”

Saturday’s second place-getter Wolves can be found at $67.00.