The Ciaron Maher & David Eustace-trained Anders has opened the early favourite in a six-horse San Domenico Stakes 2020 field in Sydney on Saturday.

It shapes up as a top-class edition of the Group 3 $160,000 San Domenico Stakes (1100m) at Rosehill Gardens this weekend despite the diminutive field size.

Sitting top of the San Domenico Stakes odds at $3 through Ladbrokes.com.au, Not A Single Doubt colt Anders is out to make it two-from-two this prep.

The smart youngster returned off back-to-back wins in the winter to salute by nearly five lengths on a Heavy (9) Rosehill track on August 8 in the Listed The Rosebud (1100m).

He faces a tougher assignment second-up returning to the same track and distance and going up two kilos in weight to 56kg, but has the in-form James McDonald in the saddle and the fitness edge over many of his rivals.

Occupying the second line of San Domenico Stakes betting in a wide-open market is one of two undefeated colts in the mix, the Gerald Ryan & Sterling Alexious-trained Peltzer ($3.80).

To be ridden by Kerrin McEvoy from barrier two, nicely-bred So You Think colt Peltzer won all three of his starts last time in including a four-length romp home at Randwick in late May carrying 59kg to victory over 1300m.

He comes back in the weights for his spring campaign kick-off and, after a winning Rosehill trial over 900m on August 18, presents a huge threat to remain undefeated following his Group race debut.

Michael, Wayne and John Hawkes have dominated the San Domenico Stakes results in recent times with three wins in the past six years.

The stable return in the 2020 San Domenico Stakes field with the other three-year-old in the mix yet to taste defeat, $4 third elect Doubtland.

Doubtland is out to hand Hawkes Racing with their fourth San Domenico Stakes win in seven years Bet now with Ladbrokes.com.au

Brenton Avdulla rides the two-time winning son of Not A Single Doubt from barrier three on the weekend, Doubtland last seen winning the Group 3 Kindergarten Stakes (1100m) at Randwick on April 4 by four lengths.

Also at single-figures paying $4.40 to salute first-up is the resuming two-time Group 1 third-placegetter Mamaragan in the outside alley (6) for jockey Glen Boss.

Chances are he could find the 1100m a little short of his preferred distance on Saturday, but will give his rivals a run for their money based on class alone.

The sole filly in the mix taking on the boys is the Mark Newnham-trained Gimcrack Stakes winner Every Rose ($13) drawn the rails, while the Chris Waller-trained Skyline Stakes runner-up Osamu ($21) rounds out the field. 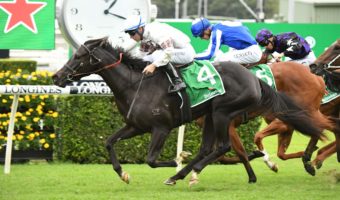 The feature two-year-old fillies’ race in Sydney of the year, the 2021 Percy Sykes Stakes, has been won in an upset by the Robert & Luke Price-tra…

The feature two-year-old fillies’ race in Sydney of the year, the 2021 Percy...