The world’s premier race for two-year-olds is the showcase at Rosehill Gardens this Saturday in Sydney and below we have our expert 2022 Golden Slipper tips and best bets ahead of the $5 million feature. 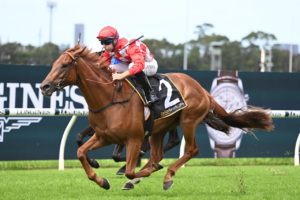 A capacity field of juveniles is gathered for this year’s Group 1 $5 million Longines Golden Slipper (1200m) and at time of publish just three are at single-figure odds to win.

Returning Magic Millions 2YO Classic winner Coolangatta is the clear $4.50 favourite in Golden Slipper betting at Ladbrokes.com.au, but the undefeated filly from the Maher / Eustace stable hasn’t raced since mid-January and that’s a definite query.

Was her Magic Millions win impressive enough to see her become history’s fourth two-year-old to do the double and the first without a run in between?

See below for the two-year-olds we’re backing and sacking before heading to Ladbrokes.com.au for all the best Golden Slipper Stakes betting markets and offers.

A filly doesn’t win her opening three starts and take out the $2 million Magic Millions Classic without class. Whether she can win the Slipper fresh though is the question. She was good with her gutsy, narrow victory back in mid-January’s feature but could be vulnerable first-up facing a number of fitter two-year-olds. She’s got a wide draw too that makes things a bit sticky for James McDonald. She hasn’t done anything wrong to date though and Maher/Eustace are master trainers of this age group. No Magic Millions winner has come back and won the Slipper without a run in between, can she be the first? Saluted as first-up favourite on debut and also has the Group 3 BJ McLachlan Stakes win in Brisbane on her record. She fires fresh, but she faces plenty of improvers. EACH WAY.

Think the fillies will have the measure of the colts and geldings this Slipper as they have plenty of times in recent years. Best bet? She’s Extreme was eye-catching third-up at this track / distance last Saturday posting a 1.44 length win in the Magic Night Stakes. She ran good time considering the Heavy (9) track and franked the Fireburn form after running second the start prior in the mud at Randwick in the Group 2 Sweet Embrace Stakes also over the six furlongs. Rock-hard fit, this daughter of Extreme Choice is out to become just the second filly since Bint Marscay (1993) to do the Magic Night – Slipper double, but she’s drawn a treat in gate six and Brett Prebble is booked for the ride. BEST BET.

There are so many at double-figures that have genuine claims at the title, including both Russian Revolution fillies for Team Snowden. Of the two, the odds are attractive on the widely-drawn Revolutionary Miss who will need luck from the gate but has been oh-so-consistent. She’s had four starts for a Group 2 win and three seconds. Her victory was in the Blue Diamond Prelude at Caulfield on the back of a Widden Stakes second at Rosehill. The Widden form was franked last weekend’ with the winner Queen Of The Ball taking out the Black Opal in Canberra to earn her Slipper spot. Revolutionary Miss meanwhile went on to go down the barest of margins to Daumier in the Group 1 Blue Diamond over the six furlongs. Whether the form out of Melbourne is the one to follow north is the only question, but happy to go with a proven Group 1 performer who is also proven the Sydney way. DANGER.