The Hawkes Racing-trained Mr Mozart was impressive back in Sydney atoning for his poor recent form down south to put them away on a Heavy Rosehill track for an upset in the 2022 Phar Lap Stakes. 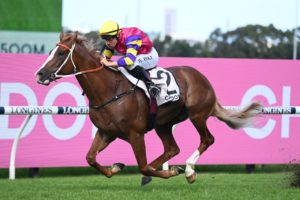 Mr Mozart was excellent in the wet posting a big upset win in the 2022 Phar Lap Stakes. Photo: Steve Hart.

Ending the incredible winning streak by Chris Waller-trained fillies in the event, the beaten odds-on favourite for the stable Fangirl was never in it when failing to pick up late in the Group 2 $200,000 Phar Lap Stakes (1500m) on Coolmore Classic Day.

Using up early energy to fight off Never Been Kissed for the lead, the William Pike ridden Snitzel colt Mr Mozart relished his first run on a wet track recording an impressive victory in his first Sydney run since April last year.

He came off back-to-back lasts at Caulfield, most recently as an 80/1 shot in the Group 1 Futurity Stakes (1400m) on Blue Diamond Day, and was forgotten by the punters again in the Phar Lap going around at $10.

Pike took control of the race early aboard the flashy chestnut who looked like he might be a sitting duck late.

The horse just kept finding once on the home straight, Mr Mozart getting a second win and putting them away by a notable margin ahead of bigger targets this autumn.

“To be fair, his runs in Melbourne have probably been a touch disappointing. In saying that, he has raced well here in the past. We just thought 1500, back to his own age, a bit of give (in the track), he went great,” Michael Hawkes told the media post-victory.

“It’s a team effort. It’s good to see this colt back in a bit of form. He has raced well here in the past and that was the plan, for Willie just to take his time to get to the front. I thought they were going to roll along a little bit more than what they did and then when he kept rolling and got to the front, I thought, wow.

“He got to the 500m and I’ll tell you what, when he gets out in front he actually likes doing it and he just kept rolling. The Heavy track probably helped him and he’s a winner.

“We’ve had the family, he’s always had the ability and he was probably a bit stiff not to win at Moonee Valley that night. He’s been a bit up and down, a bit hot and cold. It was a beautifully judged ride today, he got out in front and he just loves to run. It’s a great form turnaround.”

He set a good temp on front having poured the pressure on the Gai Waterhouse & Adrian Bott-rained filly Never Been Kissed to lead, before charging home on the inside to hold her off by two lengths.

Nothing made up ground in the Phar Lap Stakes with Godolphin’s last-start Kembla Grange winner Character also on-speed throughout running third ahead of Waller’s beaten favourite Fangirl who was the disappointment of the day finishing nearly five lengths off the winner.

Fangirl’s jockey Tommy Berry’s post-race comments were that the “sit and sprint” just did not suit the filly and she could atone next-up in a race like the Group 1 Vinery Stud Stakes (2000m) back at the track on March 26.