Class American mare Lighthouse for ace training duo Ciaron Maher & David Eustace was dominant in the wet at Rosehill Gardens breaking her string of second placings to record a Group 1 victory in the 2022 Coolmore Classic results. 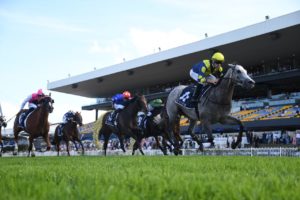 Classy grey Lighthouse was too good in the 2022 Coolmore Classic in the wet in Sydney. Photo: Steve Hart.

The last two of those were behind Tofane in Caulfield’s Group 1 C.F. Orr Stakes (1400m) and Forbidden Love at Randwick last weekend in the Group 1 Canterbury Stakes (1300m).

It was her time to shine getting out over the 1500m for the Coolmore, the mighty mare running the distance right out off a lovely ride by in-form wet track hoop Jason Collett.

“I had a perfect run,” Collett said after the race.

“I probably wanted to be just behind the speed but there were a couple that were just too quick. I ended up getting into a good spot and when I pushed the button I quickened nicely. I got to the front at the furlong and thought I could be in trouble but had enough break on them.

“They’ve gone through the grades and found a really suitable race here. A very good effort, I’m very thankful for the ride. ”

Riding with confidence, Collett had Lighthouse parked in the ideal position fifth off the speed as Expat headed off Vangelic to lead the Coolmore Classic field around.

The favourite Espiona was in last position and never featured, the disappointing Waller-trained filly likely to be sent for a spell and wait for firmer going next time in.

Expat was still leading onto the straight looking dominant, while Collett snuck closer getting Lighthouse up into third.

Inside the final furlong the eventual winner dug deep, drawing well clear and racing away to defeat the Peter & Paul Snowden-trained Mirra Vision.

In a close third to round out the trifecta was Waller’s Surround Stakes winner Hinged who jumped out of the ground late to challenge.

The Coolmore Classic result saw Collett celebrate his third career Group 1, while for the Maher/Eustace partnership it was their 13th together.

“They race a lot of horses over there, the Foxwoods, and they thought they would send her out as a tester. She was stakes placed and lowly rated and she just hit the ground running. You can see her form, she hasn’t done much wrong,” co-trainer Maher told Sky Thoroughbred Central after the win.

“The first time we took her to the races she was very excited, she took a bit of calming down. The more runs she has had, the better she has gone. She has always been pretty consistent. She has been a bit of a dream really.”

The Group 1 $1 million Queen Of The Turf Stakes (1600m) over the Randwick mile on April 9 looks a potential upcoming autumn target for Lighthouse and she’s into $13 through Ladbrokes.com.au to win with full markets available here.

“She probably goes to the other Coolmore (Legacy, now Queen Of The Turf Stakes),” Maher confirmed.

“She carried a fair bit of weight today, so the weight-for-age conditions probably suit her. She has backed up so she will have an easy couple of weeks and get ready for that.

“I’m not sure what they’re going to do, whether she goes to stud at the end of this season. They’ve got a lot of horses so I would say they’d be pretty keen to send a few more over.”