The Golden Eagle 2021 Winner: I’m Thunderstruck Salutes for the Punters

The Mick Price & Michael Kent Jnr-trained favourite I’m Thunderstruck was too good for his rivals late coming from well back to run down the brave runner-up Count De Rupee and take out a thrilling third edition of the $7.5 million Golden Eagle in Sydney. 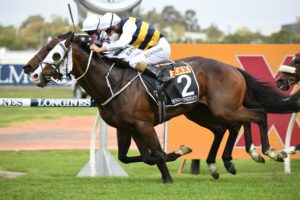 A four-year-old son of 2009 Melbourne Cup winner Shocking, the Kiwi-bred gelding was enormous late backing-up from his Group 1 Toorak Handicap (1600m) win at Caulfield to win his Sydney race debut in Rosehill’s 2021 Golden Eagle over 1500m.

“He always has to fight doesn’t he? He would have won by further and cleaner and easier if he had have had a nice run in the race but always he’s had to fight his way out and then finish off,” co-trainer Mick Price said after the race.

“It’s like the Toorak, the horse was there and the jockey was there for him. Very brave. You’ve just got to chase these races.”

Taking his record up to six wins from nine starts with a deserved victory, I’m Thunderstruck was guided to victory by Hugh Bowman who arrived late after sitting back off the sped set by Forbidden Love.

“Just amazing. I’ve been riding a long time and I’ve ridden some amazing horses as we all know and the feeling that I got today is what it’s all about. I balanced up, I was full of running and left Brock’s back (Brock Ryan – Count De Rupee) at the top of the straight because I was going so well, I didn’t want any excuses being held in,” Bowman said.

“While I was making my way clear, Brock’s skipped away and he put about four-and-a-half lengths on us I think, but I didn’t panic. I balanced him up and when I went for him he found, but at about the 200m he swapped legs and I just had to sit there while he got himself organised. Honestly, I was a passenger. He just took me to the line and I just made a point of not getting in his way and he delivered in spades.”

I’m Thunderstruck was settled around eighth in the run and still had plenty of ground to make up as Forbidden Love and the on-pace Queenslander Apache Chase swung together around the home turn.

Once on the straight it was the Robert & Luke Price-trained Count De Rupee, coming off a close third only a half-length beaten in the $500,000 Silver Eagle, looking the danger running on well once in the clear.

With 300m to go, I’m Thunderstruck started to dig in and when Bowman hit the button it was all over in a matter of strides.

I’m Thunderstruck ($3.50) went right over the top of them the last 100m, knocking off the brave runner-up Count De Rupee ($18) by a short-head with the Gai Waterhouse & Adrian Bott-trained Vangelic at 30/1 finishing a further one and a half-lengths back third.