It was an exhilarating late battle to the line the closing stages in an outstanding edition of the mares’ feature of the Melbourne Cup Carnival with the Godolphin-raced Colette diving through to narrowly deny Tassie heroine Mystic Journey victory in the 2021 Empire Rose Stakes results. 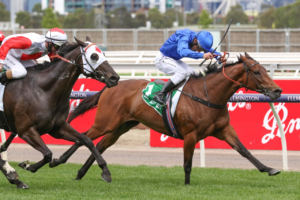 Twelve months on from her big $7.5 million Golden Eagle win in the wet on this day in Sydney, James Cummings’ now five-year-old daughter of Hallowed Crown was too good late in the Group 1 $1 million Empire Rose Stakes (1600m) over the Flemington mile on Derby Day.

“That’s just right up there isn’t it. You have to keep an open mind in training horses,” Cummings told Racing.com post-win.

“The placement’s been key for Colette and she’s turned in a magnificent career already and to avoid the Empire Rose 12 months ago so she could target the Golden Eagle was one winning decision, and the next one was 12 months later.”

Adding further top-level success to her shining CV, the bonny bay was in a class of her own last time out dominating the Group 2 Tristarc Stakes (1400m) on Caulfield Cup Day.

Having had an interrupted preparation that saw the Royal Blue brigade have to divert from her original Caulfield Cup target, Colette handed the team a lovely consolation prize in the form of the Empire Rose Stakes victory thanks to a perfectly-timed ride by Damien Oliver also picking up the $1 million VRC bonus.

Colette was so dominant in the Tristarc and franked that form on Day 1 of the Melbourne Cup Carnival in a super-charged performance to become the first to do the double since Red Tracer (2013).

Oliver opted to stay out of the early pressure and pace as Pride Of Jenni tore out to a big lead setting a frenetic pace in the Empire Rose Stakes.

Colette meanwhile was allowed to ease back, as too was the Adam Trinder-trained Mystic Journey ridden by Luke Nolen.

Inaugural $5 million The All-Star Mile winner and 2019 Australian Guineas champion at the track/distance as a three-year-old, Mystic Journey spotted them 10 lengths at the top of the straight.

Heavily backed favourite Tofane had every chance having gotten a lovely run fourth throughout with plenty of room 400m out, but never featured as a winning hope late.

It was last Saturday’s Tesio Stakes winner Flying Mascot for now Warrnambool-based Tom Dabernig who hit the front 300m to go, but Mystic Journey was soon up with her as the Chris Waller-trained Hungry Heart also came flashing out wide from the back.

Oliver presented late driving through to turn the Empire Rose into a match race late going stride for stride with Mystic Journey, who is back to her best form after her off-season knee surgery, before nabbing her right on the line.

In a brave third out of the Epsom in Sydney was Hungry Heart.

“Was nice to be back on her. She’s been such a great filly and was deserving of a race win like that,” an emotional Oliver said after he enjoyed his third Empire Rose Stakes win in the past 10 years.