Incentivise remains the clear-cut favourite in a capacity Caulfield Cup 2021 field that has now been confirmed for Saturday’s $5 million feature. 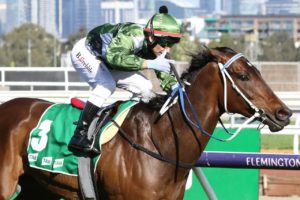 The Peter Moody-trained star is out to continue his winning streak in Melbourne this campaign heading into the Group 1 $5 million Carlton Draught Caulfield Cup (2400m) on the back of wins in the Makybe Diva and Turnbull Stakes.

The Anthony & Sam Freedman-trained Australian Cup winner from the autumn Homesman is the other top-weighted horse in this year’s Caulfield Cup field and is third-up after good runs in the JRA Cup (2nd) and Caulfield Stakes (4th) from the eight-year-old.

The stable has also accepted for their Herbert Power Stakes winner Delphi who gets in on 52.5kg.

The imported Galileo entire has Damien Oliver in the saddle again out to complete the Herbert Power Stakes – Caulfield Cup double for the first time since Master O’Reilly (2007).

The Waller contingent features Charms Star, the autumn’s Sydney Cup winner over the two miles Selino and Ocean Billy but not the reigning champion Verry Elleegant.

The now four-year-old daughter of Shamus Award has Michael Dee in the saddle again and drops from the 57kg she carried to victory on Thousand Guineas Day to just 51kg in the Caulfield Cup weights.

Verry Elleegant (2020) was the third mare since 2001 to win the Caulfield Cup and another out to be the next this spring is the David Payne-trained Montefilia.

She proved her ability over the mile and a half at Randwick on Epsom Handicap Day saluting in the Group 1 The Metropolitan (2400m).

Jockey Jye McNeil takes over from Hugh Bowman in the saddle in Melbourne on Saturday and the four-year-old Kermadec mare is in on just 52kg.

Other standout Caulfield Cup final acceptors include Naturalism Stakes winner Nonconformist coming off a Caulfield Stakes second, triple Derby winner Explosive Jack, Kiwi raider The Chosen One who ran third in last year’s race before a Melbourne Cup fourth and the Danny O’Brien-trained Young Werther coming off an eye-catching second to Incentivise at big odds in the Turnbull Stakes.

The 2021 Caulfield Cup barrier draw will take place at 6:15pm (AEDT) and updated below.