Co-trainer Gai Waterhouse took her number of wins in the Flight Stakes into double-figures with a brilliant effort from the improving Never Been Kissed over a mile to score the upset in the mile feature for fillies on Epsom Handicap Day. 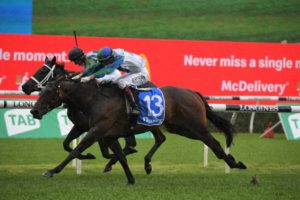 Never Been Kissed scored a boilover in the 2021 Flight Stakes at 40/1. Photo: Steve Hart.

Relishing getting out to 1600m for this year’s Group 1 $750,000 Darley Flight Stakes, the nicely-bred Tivaci filly atoned for her luckless ninth in the Group 2 Tea Rose Stakes (1400m) last time out.

Progressing through the grades at pace this prep, she won a maiden at Hawkesbury first-up before a Class 1 at Newcastle before the Tea Rose Stakes where she got caught wide and stuck on well as a 25/1 outsider.

She went around at big odds again in the Flight Stakes with Regan Bayliss retaining the ride and was so good late to give Waterhouse her 10th win in the feature and her second in partnership with Adrian Bott following their 2016 win with Global Glamour.

“Fantastic to come back here.

“She was fantastic, incredibly tough the filly.

“We just felt she was going to be a nice filly once she gets out to this sort of trip.

“Thought she ran very well in the Tea Rose where she got caught wide and covered plenty of ground.

“Getting out to a mile, which is what she needed, and a nice soft draw helped as well and he was excellent.

With a more favourable barrier draw in the Flight Stakes, Never Been Kissed was ridden right up on the pace after pouncing out the gates to settle second then third behind her front-running stablemate Swift Witness.

Swift Witness lead around the turn and quickened the pace at the 400m, still two lengths clear at the 200m.

Bayliss was quick on the scene the final furlong however, laying it down to the leader and charging through the line for a half-length win over the fast-finishing Hinged who presented as the threat along the rails.

Super brave on the seven-day back-up off her good effort against the boys in last Saturday’s Group 1 Golden Rose Stakes was the Rob Heathcote-trained Startantes who ran third as the beaten favourite to round out the Flight Stakes trifecta.

Bott said there was a possibility Never Been Kissed could head to Melbourne for a shot at the Group 1 $1 million Thousand Guineas (1600m) at Caulfield on Wednesday, October 13.

“She holds am entry for the Thousand Guineas I believe we kept her in so whether we take her down to Melbourne next weekend we’ll have a look,” he said.

All-in Thousand Guineas 2021 odds online at Ladbrokes.com.au on Never Been Kissed to be the next are into $17 with full markets available here.