The Richard & Michael Freedman-trained Tiger Of Malay kicked off his Sydney Spring Racing Carnival in style with a tough run carrying top weight up the inside in the 2021 Up And Coming Stakes results. 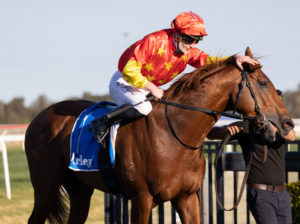 A nicely-bred Extreme Choice colt, Tiger Of Malay was tipped as the new season three-year-old to beat fresh in this year’s $160,000 Group 3 Up And Coming Stakes (1300m) – held at Kembla Grange due to COVID-19 – and the classy chestnut did not disappoint.

Winner of the Group 2 BRC Sires’ Produce Stakes (1400m) in Brisbane and last seen running third over the mile at Eagle Farm in June’s Group 1 JJ Atkins (1600m), Tiger Of Malay was very good first-up over the 1300m with the weight.

Jockey James McDonald rode the horse to perfection fourth the fence throughout and didn’t panic after finding himself caught up for room late in the piece.

Instead the hoop switched back to the inside to surge up the rails and hold off Coastwatch in a tight photo finish.

There was little separating the eventual winner and the brave runner-up on the line, but top honours went the way of the punters as the Chris Waller-trained Coastwatch up the middle at big odds had to settle for second.

In third rounding out the Up And Coming Stakes trifecta was the Peter & Paul Snowden-trained I Am Invincible colt Construct who was also good coming from last at the top of the straight to finish in the money.

The Freedmans are now plotting a spring path towards the Group 1 $1 million Golden Rose Stakes (1400m) at Rosehill Gardens on September 25 for Tiger Of Malay.

“It’s a nice race to start off the spring campaign. A great start to a promising spring.

Manawanui (2011) was the last horse to complete the Up And Coming Stakes – Golden Rose Stakes double.

All-in 2021 Golden Rose Stakes betting at Ladbrokes.com.au on Tiger Of Malay to be the next to win both races has firmed from $26 into $19.

Coastwatch meanwhile was a $201 outsider in pre-field Golden Rose odds before his eye-catching second, with full markets available here.