The Freedman brothers have their name back in the Golden Slipper winners’ list with Richard & Michael combining to win the $3.5 million classic in 2021 with Stay Inside ridden to perfection by Tommy Berry. 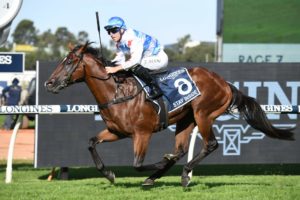 It was an emotional result for the Group 1 Longines Golden Slipper (1200m) at Rosehill Gardens this autumn, the meeting postponed a week after the early wet weather a Heavy track, as Berry posted his third win in the world’s richest race for two-year-olds.

After previous success aboard Overreach (2013) and Vancouver (2015) for Sydney’s queen of racing Gai Waterhouse, this autumn he made it a hat-trick handing one to Richard & Michael Freedman who he has a close personal association with.

“Just having that association with Michael, he’s been a good family friend when (my brother, fellow jockey) Nathan passed away.”

Well-bred Extreme Choice colt Stay Inside jumped second favourite in this year’s Slipper markets looking to return to form after a lead-up fourth in the Group 2 Todman Stakes (1200m) at Royal Randwick on March 6.

Prior to that he won his opening two career starts including the Pierro Pate (1100m) by a runaway two lengths.

On the big day he was able to turn the tables on his last start conqueror Anamoe and was absolutely dominant.

Stay Inside ran away to win by just under two lengths over the fast-finishing runner-up who was enormous in the closing stages from well back in the field.

It was the favourite Profiteer who took up the front position soon after the jump to lead this year’s Golden Slipper field around, while Berry had Stay Inside posted fourth in the run.

Hugh Bowman looked to be sitting pretty on Profiteer as he cornered in front and lead at the top of the straight, but Berry and Stay Inside were quickly cutting down the margin moving up to lead 200m out from the line.

Berry gave the eventual Golden Slipper winner a confident and well-executed ride and Stay Inside had the brilliant late burst to do the rest proving the superior colt on the day.

The James Cummings-trained Anamoe from well back from the wide barrier looks a horse to watch in the future off his big run for second, while the Golden Slipper trifecta was completed by the fellow Godolphin-raced Blue Diamond runner-up Ingratiating in third.

“A huge thrill. Michael’s done a great job with this two-year-old, as he always does.

Michael Freedman was quick to credit the professional nature of the young Stay Inside, as well as give thanks to his friend Berry.

“He’s just such a professional,” he said of the Slipper winning juvenile.

“Tommy rode him to absolute perfection. He got him into the perfect spot, conserves his energy and he’s got that wicked turn of foot.

All-in 2021 Inglis Sires’ odds at Ladbrokes.com.au now have Anamoe and Stay Inside as the equal $4.60 co-favourites and are available in full here.