Chris Waller celebrated his third win from the opening four races on Coolmore Classic Day at Rosehill with his quality mare Toffee Tongue returning to form to win the 2021 Sky High Stakes third-up ahead of a potential run in the Group 1 $1.5 million Tancred Stakes (2400m) at the end of the month. 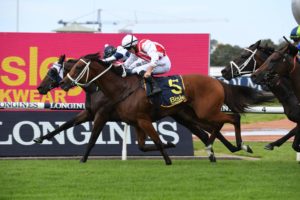 The now four-year-old daughter of Tavistock proved she was a good mare on her day breaking a notable drought in the Group 3 $350,000 Sky High Stakes (2000m) at Rosehill.

She hadn’t won a race since her Group 1 Schweppes Oaks success over the same distance in Adelaide last May, but had been competitive in plenty since including her second to stablemate Verry Elleegant in the spring’s Group 1 Turnbull Stakes also at 2000m.

Toffee Tongue hadn’t shown much in her opening two autumn assignments when out of the money and well-beaten by Colette and Verry Elleegant respectively in Randwick’s Group 2 Apollo Stakes and Group 1 Chipping Norton Stakes.

Third-up however she showed-up again, relishing a step-up to 2000m and getting a lovely run throughout with Tom Marquand in the saddle.

Mark Newnham’s returning summer revolution Spirit Ridge got out to a clear lead first-up in the Sky High, setting a genuine pace up front and looking to go all-the-way.

Toffee Tongue meanwhile settled in fourth then third taking the sit, while the race favourite Colette for Godolphin was around fifth in the small eight-starter field.

The eventual Sky High Stakes winner was felt for around the turn ready to give chase.

Spirit Ridge was ultra-brave stilling going well at the 250m, while Colette was trying to get up for the punters down the outside.

It was Toffee Tongue up the middle who presented as the challenger late, lunging at Spirit Ridge and arriving right on the line to put her nose down and force a photo-finish result.

She had just a half-head to spare over Spirit Ridge, while the Sky High Stakes trifecta was completed a further three-quarters of a length back by the spring’s Group 1 The Metropolitan winner Mirage Dancer at 20/1.

The Tancred Stakes over the mile and a half back at the Rosehill track on March 27 could be on the cards next for Toffee Tongue.