Brisbane trainer Tony Gollan celebrated his fourth Group 1 success with his in-form mare Krone too good for her rivals despite carrying plenty of weight on an unsuitably firm track to dominate the 2021 Coolmore Classic results. 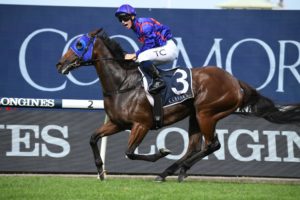 The five-year-old daughter of Eurozone went into the Group 1 $600,000 Coolmore Classic (1500m) at Rosehill having won her two lead-up races this time in.

In January she narrowly saluted at a blowout price in the $1 million Magic Millions Fillies & Mares race on the Gold Coast from a wide alley, before her last start victory by two lengths on Soft-going at Radwick in the Group 2 Guy Walter Stakes (1400m).

She won the Guy Walter at 14/1 and was again forgotten in the Coolmore Classic going up in grade and right up in weight from 54kg to 57kg.

A mare known for preferring the give out of the track, the Good (4) course at Rosehill for the Group 1 had Gollan low on confidence, but the mare did have the ideal barrier one draw for jockey Tim Clark to make the most of.

It was Sovereign Award who led the big 18-starter Coolmore Classic field around at pace, the front runner going quickly in the leads ahead of Dame Giselle and Vangelic.

Once on the straight it was Anthony Cummings’ Zoustar mare Mizzy carrying 58kg from an on-pace run hitting her strides to take up the lead at the 200m.

Clark however then got the split up the inside aboard Krone and she hit the front 100m out form the line drawing clear for a dominant win ahead of the brave Mizzy who enjoyed another big Group 1 second off her Canterbury Stakes performance behind Savatiano just last weekend.

The Peter & Paul Snowden-trained I Am Invincible filly Dame Giselle also relished an on-speed run in transit to hold for third improving off her ninth in the Group 1 Surround Stakes to complete the Coolmore Legacy trifecta.

The Coolmore Classic results saw Gollan enjoy his first Group 1 success since he ran the quinella at home in the 2014 Doomben 10,000 with Spirit Of Boom and Temple Of Boom, and he was thrilled to break the drought.

“Really satisfying. I must admit I was a lot more confident earlier in the week when I thought we were going to get a wet track.

“I always had barrier one up my sleeve, but she was always going to need a lot of luck.

“From the 600m…he (Clark) cut the corner beautifully and once the run presented, she really was just too good.

“On an unsuitable Good 3 (track) and went up in weight and she still won.

“She’s just a really good mare, in good form, and when they’re like this they’re hard to beat.

“Fantastic to be back in Sydney where it all started for Group 1s for me.”

Gollan suggested that should Krone pull up well, there was a chance they would race onto Randwick for ‘The Championships’ in April with her to target the Group 1 $1 million Coolmore Legacy (1600m).

“That’s job done for sure, but we’ve still got her heading towards the Coolmore Legacy at The Championships, that Group 1 mile,” he said.

“But we’ll just go home and see how she pulls up.”

Con Te Partiro (2020) completed the Coolmore Classic – Coolmore Legacy double last autumn and Krone is into $13 through Ladbrokes.com.au to repeat the feat.

Click here for the latest all-in Coolmore Legacy 2021 odds for April 10 thanks to Ladbrokes.com.au.