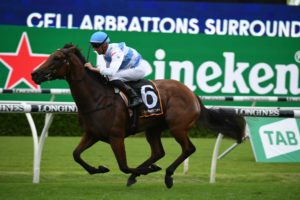 The three-year-old daughter of All Too Hard is one of 18 female gallopers in a near-capacity field for this year’s Group 1 $600,000 Coolmore Classic (1500m) at Rosehill Gardens.

It is shaping-up as one of the most intriguing and open editions of the Coolmore Classic in recent history with only three single-figure hopefuls led by the still well-priced favourite Forbidden Love at $6 through Ladbrokes.com.au.

A winner of five of her 11 starts, the up-and-comer atoned for her $2 million Magic Millions 3YO Guineas ninth at the Gold Coast in January with a three-length romp home at double-figures in Randwick’s Group 1 Surround Stakes (1400m) on February 27.

She now goes up in distance and faces the mares again after taking them on at Flemington last Derby Day running only a half-length back behind Shout The Bar in the Group 1 Empire Rose Stakes (1600m).

Regal Cheer (2006) was the last filly to complete the Surround Stakes – Coolmore Classic double, but the money is on Forbidden Love to be the next drawn well in barrier three with Nash Rawiller to ride.

Another eye-catcher in the spring’s Empire Rose Stakes when running fourth, this Testa Rossa four-year-old is yet to win over further than 1400m and races in Sydney for the first time.

Still, she’s being kept safe in betting bringing in the strong Melbourne form lines and drops right back in weight from 56kg to just 52.5kg.

Rounding out the single-figure fancies at $9 is the Brad Widdup-trained Icebath drawn ideally in barrier six with Kerrin McEvoy to ride.

Runner-up to Colette in the $7.5 million Golden Eagle (1500m) at this track and distance on a Heavy (9) track last October, this four-year-old daughter of Sacred Falls presents fit third-up on Saturday for the Coolmore.

Tony Gollan’s Guy Walter Stakes winner Krone is up in grade chasing another victory on Saturday from barrier one with Tim Clark aboard.

The in-form Eurozone five-year-old earlier won the $1 million Magic Millions Fillies & Mares race this summer so is out to extend her winning streak to three.

She was at blowout odds on the Gold Coast and was also underrated for the Guy Walter making her potential value for the Group 1 at $17 on Saturday despite her 57kg.

The other last-start winners in the mix are: Group 3 Mannerism Stakes winner Rich Hips ($13), the Danny O’Brien-trained Sovereign Award ($21) who took out Flemington’s Group 3 Matron Stakes (1600m) and comes back from 59kg to 55kg; and the Chris Waller-trained Subpoenaed ($11) who took out the Group 2 Millie Fox Stakes (1300m) at Rosehill on February 20.