Trainer Phillip Stokes unearthed a genuine Group 1 Thousand Guineas hope in Instant Celebrity at Morphettville Parks on Saturday with the filly overcoming a horror run to burst through for a super win in the Listed $100,000 Oaklands Plate (1400m). 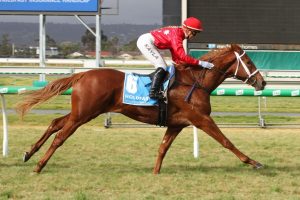 She was the easing favourite on track out to $4 through Ladbrokes.com.au to make it two-from-two after her winning debut at Morphettville over 1050m on June 20 but rewarded the punters with a last-to-first win.

Without a suitable race in between, the team were forced to give the very promising daughter of Not A Single Doubt a month between runs as she rose notably in grade and distance for the Oaklands Plate.

There were some concerns about how she would go over the extra distance, but off a solid jump out in the lead-up, Instant Celebrity was all class on race day.

“I’ve got a really big opinion of this horse, although I was a bit worried,” stable representative Thomas Stokes told the media post-win.

“There wasn’t any lead-up run for her…we gave her a solid jump out in between and I’m just so happy it paid off.”

Nothing went right for her and jockey Kalya Crowther, who celebrated her 100th win for the season with the Oaklands Plate result, as the favourite settled towards the back of the field with no cover.

As they approached the 400m turn for home Instant Celebrity was last off the leader Mayameen and the widest on track, the filly not handling the corner at all.

Displaying a brilliant turn of foot however she burst through for a scintillating 400m – 200m sectional quickly running past her rivals and putting a big gap on the field.

Despite tiring late in the run, Instant Celebrity held on for a three-quarter length victory over the Tony & Calvin McEvoy-trained The Brumby who also come from the back of the field with a late run.

In third was Another Award for Leon Macdonald and Andrew Gluyas, the Oaklands Plate trifecta putting a huge gap on the rest with The Krone the next best over the line.

She may not have had an ideal first preparation timing-wise, but Instant Celebrity looked something special winning the Listed Adelaide feature and the stable have bigger targets heading to Melbourne for the spring.

Stokes confirmed the Group 1 $1 million Schweppes Thousand Guineas (1600m) over the mile at Caulfield on October 10 was the long-term plan and that they would give her a soft campaign in the lead-up to have her firing for the big one.

“[The Thousand Guineas] will be the plan,” he said.

“It’s probably not the ideal prep but we’ll really look after her and make sure it happens.”