The bookies are having a hard time separating the top four fillies in this weekend’s 2022 Australian Oaks field and betting markets with a host of top three-year-olds in the mix on Day 2 of The Championships. 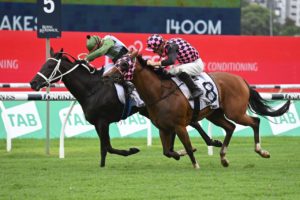 Royal Randwick is host to a bumper card on Saturday headlined by four elite level races including the Group 1 $1 million Australian Oaks (2400m).

The 2022 Australian Oaks field attracted a capacity line-up of 18 fillies with current markets at Ladbrokes.com.au narrowly led by the Hinged at $4.20.

The daughter of Worthy Cause has been good her past three starts including her close Group 1 Surround Stakes (1400m) upset in late February.

She was brave when third behind Lighthouse taking on the older mares in the Group 1 Coolmore Classic (1500m) and was last seen running second to stablemate Fangirl by the barest of margins in the rescheduled Group 1 Vinery Stud Stakes (1850m) run at Newcastle on March 28.

Hinged is the best out of that traditional Oaks lead-up and presents fit for her distance test, Saturday her first run over further than 1850m.

The danger occupying the second line of Australian Oaks betting this season is the Queenslander Gypsy Goddess hot on her heels at $4.40.

Prepared on the Sunshine Coast by David Vandyke, the ultra-consistent daughter of Tarzino was five-from-five in her home state before coming to Sydney for the Vinery.

There she ran a distant third behind the Waller quinella, a run she is looking to improve on here getting out to 2400m.

She looks like she will run a strong mile and a half having beaten the boys by nearly four lengths last December in Eagle Farm’s Group 3 Grand Prix Stakes (2100m) and jumps from barrier 11 with William Pike aboard.

The other best in betting at an equal $5.50 are Honeycreeper and Pink Ivory drawn in barriers 15 and nine respectively.

The James Cummings-trained Honeycreeper is on the quick back-up, the Teofilo filly having won the Group 3 Adrian Knox Stakes (2000m) here last Saturday by over three lengths.

She did it from barrier 13 of 15 so can handle the wide draw, the wet track and has the benefit of a confident Hugh Bowman retaining the ride in the famous Royal Blue silks.

Colette (2020) for the same stable was the last filly to complete the Adrian Knox Stakes – Australian Oaks double and there’s money for Honeycreeper to repeat the feat this weekend.

Pink Ivory meanwhile represents John Sargent and will be ridden by one of Sydney’s best, James McDonald.

Two back at Newcastle she won a Benchmark 64 by four lengths over 1880m before running fifth in the Vinery with improvement to come.

Outside of the dominant four the next best fancied include the Ciaron Maher & David Eustace-trained VRC Oaks third place-getter from the spring in Melbourne Biscayne Bay ($13) and fellow Victorian visitor El Patroness ($16) for Danny O’Brien offering the potential value for an upset in the Oaks.