The blueprint of blinkers on for the big one worked out again for the dynamite two-year-old training combo of Anthony & Sam Freedman who incredibly won the Group 1 $1.5 million Blue Diamond Stakes (1200m) for the third time in four years today with Daumier. 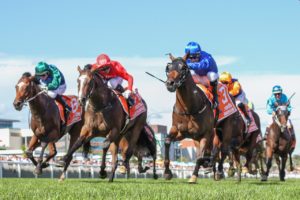 Daumier was excellent with the blinkers on to win the 2022 Blue Diamond Stakes at 19/1. Photo: Ultimate Racing Photos.

Following recent victories with the also Godolphin-raced Lyre (2019) and Artorious (2021), Team Freedman were back on top of the 2022 Blue Diamond Stakes results at Caulfield with an impressive upset from their progressive son of Epaulette Daumier.

“Just proud of the whole team. It’s been a fair sort of build up to this but the staff at Pinecliff and Flemington, I stand here and do the interviews after a win like this but they’re doing all the hard work,” co-trainer Sam Freedman told Racing.com after the victory.

“Mark Zahra gave him a great ride. To Godolphin, they’ve supported us with a handful of horses every year and everyone there is a pleasure to deal with, they let us place the horses as we wish.”

Like Artorious last autumn, the colt was able to improve a couple of lengths donning the blinkers for the first time to atone for his third behind Lofty Strike – scratched from the Group 1 on race day eve – in the Prelude last time out.

That run followed a successful debut in the Blue Diamond Preview and Daumier returned to winning form at a nice $20 quote getting a wonderful run in transit in the Group 1 by jockey Mark Zhara.

“To the horse’s credit he really knuckled down there late. This colt has shown very good ability from day one and it’s nice to see it come to fruition,” Freedman said.

“The (Blue Diamond) Preview was a look and see. We probably didn’t think he would win over 1000m, we always thought he would be better over 1200 (metres).

“He won that but he had a good look around late.

“We toyed with the idea of putting winkers on him or something for the prelude. Ultimately, we needed to find a couple of lengths today, it was the same story probably with Artorius last year.

“He worked super in them on Tuesday.

“You’ve got to be right on top of your game and thankfully he was today.”

Using up early energy to get out to a big lead was Semillion, while Zahra bid his time on the eventual winner who was settled in the second half of the field.

Once on the straight the fans were in for a big finish with a wall of runners coming including Daumier who went back to the inside and held on in a photo-thriller to deny the well-backed Peter & Paul Snowden-trained Prelude winning mare Revolutionary Miss who was very tough late.

In third rounding out the Blue Diamond Stakes trifecta was the beaten favourite Jacquinot who was brave in defeat with plenty of improvement to come looking ahead to his three-year-old season.

“It’s very special. I’ve picked the wrong horse in this race probably for about the last 10 years running and had a choice of a couple in this, so it’s good (to get it right),” winning jockey Zahra said.

“You put in the work for the Freedmans, go down there and do a lot of morning work. To work as a team and get a result is very rewarding.

“I came here and I said he’s going alright, but I think we need to find something and we put the blinkers on. His work was really good on Tuesday morning and I was still a bit cautious, I thought he’s definitely got a better hope than he did without them, and I was just able to get to a spot where I was able to get room and to really get at him, which he needs, and he responded.

“Obviously the blinkers helped me travel just off the speed, which has been good today and concentrate a bit more in the straight.”

There is now the potential for the Blue Diamond Stakes winner Daumier to head up to Sydney for a shot at the $5 million Group 1 Golden Slipper Stakes (1200m) at Rosehill on March 19.

Since Courtza in 1989, Sepoy (2011) is the only horse to complete the interstate Blue Diamond Stakes – Golden Slipper double.

The latest all-in Golden Slipper 2022 odds online at Ladbrokes.com.au have Daumier at $17 to be the next and are available in full here.