The final 16 acceptors for the Group 1 $1.5 million Neds Blue Diamond Stakes (1200m) have been confirmed ahead of the Melbourne Autumn Racing Carnival‘s feature race for two-year-olds running at Caulfield this weekend. 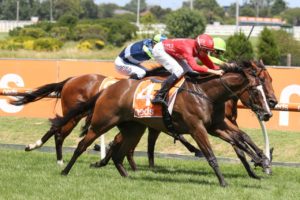 Ten colts and geldings and six fillies are engaged in this year’s 2022 Blue Diamond Stakes field including both Prelude winners.

Jockey Jamie Mott continues associations on the progressive Snitzel colt who was dominant at double-figures winning his Group 3 lead-up over 1100m on February 12.

The fillies’ edition of the Prelude on the same date was won in style by the Peter & Paul Snowden-trained Revolutionary Miss.

She is now the best fancied of the girls to beat home the boys in the Blue Diamond Stakes results this weekend after running quicker time in the Prelude.

She has her fourth career start in the Group 1 after breaking her maiden status in the Prelude when running outside of Sydney for the first time.

Eight of the past 23 Blue Diamond Stakes winners have been fillies, most recently Lyre (2019).

A nicely-bred daughter of Russian Revolution, Revolutionary Miss will be ridden by Jamie Kah.

He is after his second in partnership with son Paul and Revolutionary Miss is the stable’s sole final acceptor.

The other best out of the boys’ edition of the Blue Diamond Prelude is runner-up Semillion, last year’s Inglis Banner winner running for Michael, Wayne & John Hawkes.

The Hawkes’ stable has not won a Blue Diamond Stakes since the 2003 victory of Kusi for John Hawkes.

This year they saddle-up two in the mix with Semillion joined by Capitalist colt Sebonack, winner off the Group 3 Chairman’s Stakes (1000m) at the Caulfield track on debut on February 5.

Also getting plenty of early love ahead of the juveniles’ showdown is Mick Price & Michael Kent Junior’s Rubick colt Jacquinot who finished off well when fifth to Lofty Strike in the Prelude off a previous big Caulfield win on Boxing Day over the 1200m.

He will relish the step back-up to six furlongs and could prove the value with Damian Lane retaining the ride.

Connections of the Peter Gelagotis-trained Miss Roseiano meanwhile opted to pay the late entry not having originally nominated the talented Exceed And Excel filly.

She won the Group 3 Blue Diamond Preview (F) on debut on Australia Day before a second in the Prelude three-quarters of a length beaten.

Other notable Blue Diamond Stakes runners this autumn include I Am Invincible colts Counttheheadlights and Hafey for the ace Maher/Eustace stable.

Peter Moody meanwhile is in with three runners as he looks for a second Blue Diamond Stakes success following his 2009 victory with Reward For Effort.