James Cummings and the Godolphin team are in with a strong hope ahead of Thursday’s Group 1 $1 million Kennedy Oaks (2500m) following the impressive win by Willowy, ridden by last year’s Melbourne Cup winning jockey Jye McNeil, in the 2021 Wakeful Stakes results on Derby Day. 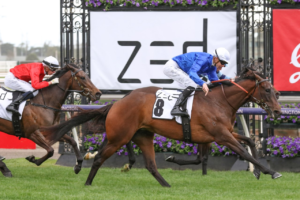 Willowy is into the 2021 Kennedy Oaks as a firming chance after an impressive Wakeful Stakes win on Derby Day. Photo: Ultimate Racing Photos.

There was a little bit of support on track at Flemington for the nicely-bred Kermadec filly Willowy who jumped around 10/1 in this year’s Group 2 $300,000 Wakeful Stakes (2000m).

McNeil, who will again partner the reigning Melbourne Cup winner Twilight Payment in Tuesday’s $8 million classic, produced a huge ride in third on Victoria Derby Day to sweep past the entire field and take out the Wakeful for the Royal Blue brigade.

“It wasn’t until we got to the outside, swapped legs where we saw that fantastic finish,” winning hoop McNeil said.

It was a notable class rise for the progressive Willowy who made her Group race debut at start number five on the back of a nearly four length victory with 59kg over the Newcastle mile on October 12.

She may have been up in grade, but she was well-weighted with 55kg at set weights plus penalties in the Wakeful and absolutely ate-up the 2000m in a very nice trial ahead of the Kennedy Oaks 2021.

El Patroness, keen in the gates, used the inside alley to her advantage to hit a clear lead setting an even tempo in front on the fence before fading late to drop right out.

Barb Raider was also up on speed throughout before taking the lead 300m out from the line.

At the 200m she was nabbed by last start Group 3 Ethereal Stakes winner Daisies who looked the winner after getting off the fence.

Daises gave a lovely kick, but flashing home was Willowy who got up to win in a big late effort with Douceur in third completing the Wakeful Stakes trifecta.

“If she pulls up absolutely bouncing then we’ll certainly give it consideration to back her up on Thursday (in the Oaks).

“She’s got a rising stayer through the grades written all over her and a very promising filly with a big, big pedigree.”

All-in Kennedy Oaks odds online at Ladbrokes.com.au on Willowy in from $17 to $6 to be the next can be found here.