A total of 48 three-year-old fillies make-up the official 2021 Kennedy Oaks nominations for this season as the countdown to the premier staying races of the spring heats up. 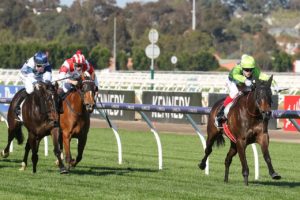 Melbourne Cup winning horseman Danny O’Brien is in with four entries as he chases a second VRC Oaks win in three years following his 2019 success with Miami Bound.

Nicely-bred Tavistock filly Kapalua Sunset has had two starts and broke her maiden status last time out on September 21 at Kyneton over 1875m by a runaway seven lengths.

That performance shot her to the top of the all-in Kennedy Oaks odds online at Ladbrokes.com.au where she currently pays $6.

Her stablemate El Patroness, who defeated the all-in VRC Derby favourite Gunstock (3rd) in the Super Impose, follows closely on $8.

Between them at VRC Oaks odds of $7 post-nominations is Barb Raider for Mornington horseman Jerome Hunter.

Barb Raider is a daughter of the 2008 Victoria Derby winner Rebel Raider who claimed victory at 100/1.

She has had four runs for two wins to date, the latest an eye-catching two-length effort over Blackcomb at Flemington on September 22 over the 1800 as the odds-on favourite in the Kennedy Oaks Preview.

Gai Waterhouse & Adrian Bott recently won the Oaks in Melbourne in 2017 with Pinot and they have three entries led by their upset Flight Stakes winner from last weekend Never Been Kissed.

Flight Stakes runner-up for Chris Waller, Hinged, is also Kennedy Oaks-nominated and is the sole entry for Waller who is yet to prepare a winner of the classic.

A start in the Oaks for the Anthony & Sam Freedman-trained Atlantic Jewel Stakes winner Zouzarella meanwhile will depend on whether she salutes for the punters as the favourite in next week’s Group 1 Thousand Guineas (1600m).

The Freedman’s have also entered their Group 2 Edward Manifold Stakes winner Elusive Express, and the two placegetters out of that mile showdown Yearning for Team Hawkes and Glint Of Hope for Busuttin & Young are also nominated for a potential rematch in the Oaks.