The Bjorn Baker-trained Sydney Cup fourth placed mare She’s Ideel is one of the all-in favourites to take out the Group 1 The Metropolitan in 2021 following nominations for the mile and a half classic. 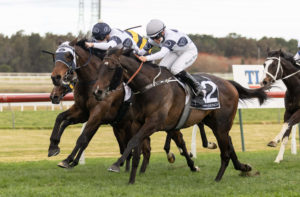 Premier’s Cup winner Harpo Marx is one of the best in all-in 2021 The Metropolitan betting following the nominations. Photo: Steve Hart.

Early entries for a host of the upcoming Sydney Spring Racing Carnival majors closed on Monday including all three elite level races running at Royal Randwick on Epsom Handicap Day on October 2.

The staying feature on the card is the Group 1 $750,000 The Metropolitan (2400m), the handicap showdown attracting 85 stayers at nomination stage this week.

One of the early favourites in the mix is six-year-old Dundeel mare She’s Ideel who chases her first win since October last year.

It may have been a while between drinks, but she was very good in the autumn including when runner-up on Rosehill’s Group 1 Tancred Stakes (2400m) and fourth over the two miles in the Group 1 Sydney Cup (3200m).

This time in she has had two starts including a Group 1 Winx Stakes third fresh behind Mo’unga and will only improve getting out to the mile and a half in The Metrop next month.

Baker has a total of five entries for The Metropolitan this season with his other headline nominee being last start Group 3 Premier’s Cup winner Harpo Marx.

Also in good form ahead of a potential The Metropolitan bid is the John O’Shea-trained evergreen eight-year-old Berdibek, recent winner of the Rowley Mile – Wyong Gold Cup double.

The Ciaron Maher & David Eustace stable are in with 12 entries including English expat King’s Charisma and the consistent Puissance De Lune five-year-old Heart Of Puissance.

Last year’s champion, Mirage Dancer for Trent Busuttin & Natalie Young, is nominated for a potential title defence with the last back-to-back The Metropolitan winner being Hayai (1983-84).

The Metropolitan Handicap 2021 weights are announced on Monday September 13 and updated all-in betting courtesy of Ladbrokes.com.au can be accessed here.