A ballot free ride into the Ladbrokes Cox Plate is up for grabs this weekend at Moonee Valley with at top class field of 14 horses vying for the prize in the 2021 John F. Feehan Stakes field. 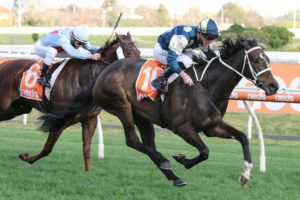 The Group 2 $500,000 Feehan Stakes (1600m) shapes up as a great race on Saturday at The Valley with the latest markets led by Danny O’Brien’s Perth expat Superstorm along with the rails-drawn Elephant both at $5 through Ladbrokes.com.au.

Formerly with Grant & Alana Williams in WA, now five-year-old Sebring gelding Superstorm is best known for his $5 million The All-Star Mile second to then stablemate Regal Power at Caulfield back in March 2020.

He hasn’t won a race since February of 2020, but was runner-up in the Group 1 Australian Guineas (1600m) that year at Flemington as well as placing third to Mr Quickie in last October’s Group 1 Toorak Handicap (1600m).

First-up Superstorm was good only one and a half lengths beaten in the Group 2 P.B. Lawrence Stakes (1400m) when fourth and if he handles his first look at Moonee Valley he can improve off that.

Adding some interest to the race is the undefeated Shocking five-year-old Elephant from New Zealand, the Emma-Lee & David Browne trained gelding having his second run down under.

He came to Australian unbeaten and won over 1400m at Caulfield first-up in mid-August and now rises notably in grade for the Group 2 at The Valley chasing a sixth win from as many starts.

She was scratched from last Saturday’s Group 1 Memsie Stakes (1400m) with a foot abscess, but can score a consolation prize here.

Drawn in gate two, the five-year-old daughter of Darci Brahma chases a third win on the trot having been brought on fitness and confident wise with her Mildura Cup win in July and John Allen retains the ride.

“She is back on track and is 100 percent,” co-trainer Busuttin told SENTrack.

“It was bad timing, but luckily it (the foot abscess) has burst and has come right. You never know, it may be a blessing in disguise, it looks a nice race for her on paper.

“That horse of Danny O’Brien’s (Sovereign Award) is a hard-going horse, so that will take it along at a fairly genuine tempo I would suggest. We will sit right up there but I am hoping we don’t have to drag the field up.

“It’s basically a field full of stayers resuming and some of them will be attacking the line late.

“We are pretty confident our mare can measure up if she runs up to her last start.”

The remainder of the Feehan Stakes field can all be found at double-figures with the best of the outsiders being Scott Brunton’s Tasmanian galloper Shot Of Irish ($10) coming off a lead-up third at the track; Kiwi raider The Chosen One ($12) who ran third in last year’s Caulfield Cup and fourth in the Melbourne Cup; and the Grahame Begg-trained Nonconformist ($13).