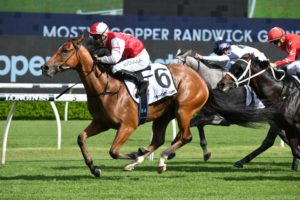 Lion’s Roar is out to win the Rosehill Guineas 2021 on the back of his Randwick Guineas victory last start. Photo: Steve Hart.

The revised Golden Slipper Day card takes place this weekend following last Saturday’s washout and one of the key features on the program is the Group 1 $600,000 Rosehill Guineas (2000m).

The updated Rosehill Guineas field is down to 14 three-year-old staying types following the early withdrawal of Explosive Jack (13) who instead races in Bendigo’s St. Leger Trial (2200m).

Sitting top of the latest Rosehill Guineas odds at Ladbrokes.com.au paying $2.70 and firming after drawing ideally in barrier six is the Annabel Neasham-trained Savabeel colt Mo’unga to be ridden by Tommy Berry.

After a first-up third at Flemington behind Tagaloa in the Group 3 CS Hayes Stakes (1400m) with Jamie Kah in the saddle, Mo’unga was last seen running second when doing his best work late with Berry aboard in the Group 1 Randwick Guineas (1600m).

One and a quarter-lengths beaten over the mile after being hampered at the start and held up 400m out from the finishing post last time out, Mo’unga looks a huge chance to go one better getting out over 2000m third-up on Saturday.

Lion’s Roar meanwhile is at $8 to complete the Randwick Guineas – Rosehill Guineas double for the second time in three years following the 2019 success of The Autumn Sun.

The John O’Shea-trained Contributer gelding is out wide in gate 12 on Saturday and at his last run over the 2000m was second behind the gun filly Montefilia in Randwick’s Group 1 Spring Champion Stakes last October.

Montefilia made history that campaign when backing-up off her Flight Stakes win to beat the boys in the Spring Champion Stakes and she too is part of the Rosehill Guineas line-up this weekend.

David Payne’s talented daughter of Kermadec is the $6.50 second elect in the Rosehill Guineas markets to secure another Group 1 success second-up off her sixth to Forbidden Love fresh in the Group 1 Surround Stakes (1400m).

She will be better for the run and more suited to the notable step-up in distance this weekend and despite not having had an ideal lead-up, has previous second-up form on a wet track.

The last of the single-figure fancies at $7.50 in the current Rosehill Guineas odds is the Ciaron Maher & David Eustace-trained Victorian raider Grandslam in gate five with Mark Zahra in the saddle.

The Myboycharlie colt was brilliant last start at The Valley on William Reid Stakes Night when powering home for a dominant six length win in the Group 2 Alister Clark Stakes (2040m).

It was a notably improved run off his 12th in the Group 1 Australian Guineas (1600m) at a roughies’ price and showed his affinity for the distance he runs over again on Saturday, this time trying to frank the form in Sydney.