Updated 2021 The Galaxy Race Field & Odds: Mares Tipped to Battle It Out

Two classy mares are tipped to battle it out in an intriguing edition of The Galaxy 2021 this weekend with the returning Haut Brion Her and the in-form Tailleur dominating betting on the rescheduled Rosehill sprint. 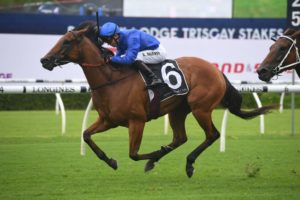 Tailleur is one of the top fancies in the updated 2021 The Galaxy race field this Slipper Day in Sydney. Photo: Steve Hart.

Rosehill Gardens was a washout last weekend and the Golden Slipper Day program was moved seven days later to take place this Saturday on a likely Heavy (9) track.

The feature sprint on the card is the Group 1 $700,000 The Galaxy (1100m) with the updated field for the handicap clash attracting 14 runners coming via a variety of form lines.

Sitting top of the current The Galaxy odds at $4.60 through Ladbrokes.com.au is the talented James Cummings-trained Tailleur drawn well in barrier six for jockey Rachel King.

The ultra-consistent Shooting To Win four-year-old is yet to finish out of the top two in her eight career starts (8:6-2-0) and is a brilliant wet track performer having won three from four on Heavy going.

She gets conditions to suit on Saturday as she goes up in class on the back of her quarter-length Randwick win from mid-February in the Group 3 Triscay Stakes (1200m).

The mare is also undefeated at Rosehill boasting two earlier wins, including one by three lengths over this distance back in January when carrying 58kg to victory.

While Saturday’s is a tougher line-up, she will be airborne with only 51kg and will take some beating.

The danger fresh in barrier four from the powerhouse Waller stable is Haut Brion Her ($4.80) to be ridden by James McDonald from gate seven.

The five-year-old daughter of Zoustar boasts a 50% winning strike rate over her 12 starts to date, her latest victory being in the Group 2 Sheraco Stakes (1200m) at Rosehill last September on a Good (4).

Fifth in the $15 million The Everest (1200m) later that prep at big odds, she showed her versatility when finishing second to Gytrash on a Heavy (9) at Rosehill behind Gytrash in the $1 million Winners’ Stakes (1300m).

Brought-on fitness-wise with two winning February trials, Haut Brion Her presents as a huge chance here for Waller to win his third The Galaxy and second in three years after his success with Shellscrape (2010) and Nature Strip (2019).

Occupying the third line of The Galaxy betting at $6.50 is the Joe Pride-trained Eduardo who will need to be good carrying the 57kg top weight on the weekend.

Nash Rawiller continues associations with the talented Host seven-year-old who is proven in the wet having won the Group 2 Missile Stakes (1200m) on a Heavy (9) here last August.

He was back in the winners’ stall first up at Randwick at the start of the month on firm ground carrying 58.5kg to victory over Nature Strip in an upset Group 2 Challenge Stakes (1000m) result and will be fitter for the run here.

The other $6.50 third elect in this year’s The Galaxy field is the Peter & Paul Snowden-trained Wild Ruler in gate nine with Kerrin McEvoy to ride.

A winner of three of his past four starts, the progressive Snitzel colt was excellent in the spring backing-up from a two-length win in Sydney’s Group 2 Roman Consul Stakes (1200m) to run third to September Run at Flemington in the Group 1 Coolmore Stud Stakes (1200m) down the straight.

He kicked off at Randwick on March 6 and was eye-catching first-up when saluting as the odds-on favourite with 59kg in the Listed Fireball Quality (1100m).

Second-up he is up notably in grade but comes right back in weight to just 51.5kg (allocated 51kg) and if he gets away better from the barriers than first-up, could be a big threat.

Click here for the latest The Galaxy 2021 betting odds courtesy of Ladbrokes.com.au.