Sixteen of the country’s most promising two-year-olds have been accepted for Saturday’s Group 1 $3.5 million Golden Slipper Stakes (1200m) at Rosehill including two late entries into the world’s richest race for juveniles. 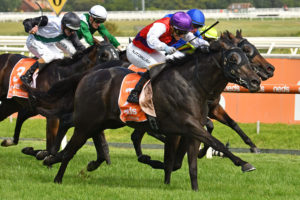 Connections of Artorius and Rocket Tiger paid the $150,000 late entry fee on Monday to get their young hopefuls into the 2021 Golden Slipper field making for another intriguing edition of the autumn classic.

The Anthony & Sam Freedman-trained Flying Artie colt Artorius hasn’t been seen since his upset win in Caulfield’s Group 1 Blue Diamond Stakes (1200m) in February and Saturday will be his first Sydney assignment.

He attempts the Blue Diamond – Golden Slipper double last completed by Sepoy (2011) and is drawn out in barrier 13 with Luke Currie to ride.

Scott Spackman’s progressive Cluster gelding from Wagga Wagga Rocket Tiger meanwhile is the fairy tale story in the event racing competitively this season hen second in the Group 2 Silver Slipper at Rosehill before a third in Canberra’s Group 3 Black Opal Stakes (1200m) at the start of the month.

Kathy O’Hara is booked to ride the fast-finishing Rocket Tiger in the Slipper with the gelding also drawn wide in gate 14.

Also making this season’s Golden Slipper field for Annabel Neasham is Queen Of Wizardry to be ridden by John Allen from barrier four.

Along with Artorius there are six other last start winners in the line-up for the Golden Slipper Stakes this year including the Chris Waller-trained Shaquero out in gate 15.

The $2 million Magic Millions 2YO Classic winning Shalaa colt secured his position in the race donning the number one saddlecloth after his return to winning form when narrowly denying Tiger Of Malay in last weekend’s Group 3 Pago Pago Stakes (1200m).

Stratum (2005) was the last horse to complete the Pago Pago – Golden Slipper double on the quick back-up.

The other ‘win and you’re in’ youngster from last Saturday was Thermosphere who the Godolphin stable have opted not to accept for.

The Royal Blue brigade are still well represented as they chase another Slipper success with the James Cummings-trained duo of Anamoe and Ingratiating in barriers 16 and 11 respectively.

Frosted colt Ingratiating was runner-up in the Blue Diamond Stakes before his fifth in last Saturday’s Pago Pago Stakes when having his first run the Sydney way.

Street Boss colt Anamoe also comes off his maiden Sydney assignment when taking out the Group 2 Todman Stakes on March 6 at Randwick.

Waller meanwhile chases his first Golden Slipper success and along with Shaquero also has his Silver Slipper winner Home Affairs looking to atone for a Todman Stakes third in the mix from barrier two with James McDonald to ride, along with his in-form Group 2 Skyline Stakes winning Fastnet Rock colt O’President in gate eight for jockey Glen Boss.

Richard & Michael Freedman’s Zoustar filly Glistening is another in-form two-year-old coming off a lead-up victory having broken her maiden status at Randwick earlier in the month with a Group 2 Reisling Stakes upset.

Estijaab (2018) was the last filly to win the Slipper off a Reisling Stakes victory and Glistening is drawn well in barrier seven as she looks to take another huge step on Saturday.