Sunday sees the always-popular Ladbrokes Hobart Cup 2021 take place in Tasmania towards the tail-end of the summer carnival and it the French-bred Barade leading markets on the staying showdown. 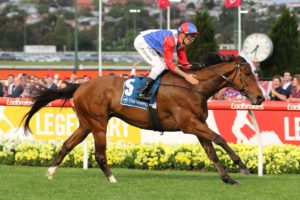 Double You Tee returns to racing in Tasmanian for the first time in nearly two years for this weekend’s Ladbrokes Hobart Cup 2021. Photo: Ultimate Racing Photos.

Sitting top of the Hobart Cup odds at race sponsor Ladbrokes.com.au paying $4.80 in a fairly open market, the Archie Alexander-trained Barade is one of the few interstate raiders in the mix and has his first run in Tasmania.

The Havana Gold six-year-old is looking to bring his winning form down with him, last seen saluting in Brisbane’s Shoot Out Quality (2206m) at Eagle Farm on January 2, and looks well weighted here carrying just 54kg again.

Occupying the second line of Hobart Cup betting this summer at an equal $6 are Toorak Affair and Double You Tee drawn in barriers five and 12 respectively.

The local Michael Trinder-trained Toorak Toff mare Toorak Affair has a 50% winning strike rate at the Hobart track having won three from six ahead of the weekend’s fixture.

The 40-start veteran is also the reigning Hobart Cup champion having won the race last year, and she has enjoyed two subsequent stakes victories at Launceston since.

She comes off a fourth at Hobart over 2200m from January 24 at weight-for-age and is looking to be the first back-to-back Hobart Cup champion since Brallos (1976-77).

There has been one subsequent two-time winner in Geegees Blackflash, but he won on non-sequential years in 2012 and 2015.

Toorak Affair got the job done as the favourite 12 months ago, and she is right up there in betting again this season.

The fellow $6 second-elect, Double You Tee is prepared out of Plumpton by Patrick Payne and has his sixth Hobart start on Sunday.

The Written Tycoon six-year-old’s record at the track is good with a win and two seconds, but he hasn’t been in Tasmanian since March of 2018.

Other single-figure Hobart Cup horses in the mix include the consistent Scott Brunton-trained Hobart specialist Mandela Effect ($8) who has had eight starts at the track for four wins and three seconds, Glass Harmonium mare Glass Warrior ($8.50) and early market mover Classic Weiwei ($9) to be ridden by Daniel Stackhouse.