A peach of a ride from Damien Oliver has helped Princess Jenni claim a maiden Group 1 victory in the 2019 Australasian Oaks at Morphettville this afternoon. 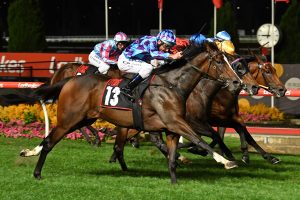 Princess Jenni got a long way back in the run and had plenty of horses in front of her coming into the straight, but Oliver was able to weave a passage through and Princess Jenni found clear running at the 100 metre mark.

That was all that she needed and she stormed home in the concluding stages of the race to record a most impressive victory.

Assistant trainer Alex Woodhams admitted after the race that the Australasian Oaks was not the easiest watch for him, but he paid credit to Oliver for getting Princess Jenni out into clear running at the ideal time.

“You put Ollie on and he produces something special most of the time,” said.

“It was a bit nerve-wrecking, but the main thing is that he got the job done.

“I just knew that if she got a bit of room, she would put in and he got the split finally.

“She had a bunch of problems throughout the run, but still to sprint like that when the gap came was quiet impressive.”

Princess Jenni started her racing career with a second place finish at Pakenham and she recorded her maiden race win at Geelong in November of last year.

She made her black-type racing debut with a seventh place finish in the Kewney Stakes and before she recorded back-to-back victories in the Alexandra Stakes and Jack Elliot Handicap.

The Australasian Oaks victory of Princess Jenni was David Brideoake’s third after taking out the 2008 WATC Derby with Grand Journey and the 2016 edition of The Galaxy with Griante.