The bookies are tipping a two-horse race in the 2022 Mornington Cup on Saturday with Pondus and Crystal Pegasus battling for top spot in betting. 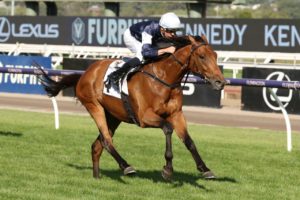 A field of just seven stayers remains for the popular Listed $300,000 Neds Mornington Cup (2400m) with the early scratching of Encosta Fiorente (8) from the mile and a half feature.

Narrow favourite at time of publish at $2.70 through Ladbrokes.com.au in Mornington Cup betting is the Robert Hickmott-trained Pondus on the quick back-up.

Jumping from barrier three with Michael Dee to ride on the equal 59.5kg top-weight, the Sea The Moon gelding raced up to his best form second-up last weekend at Flemington.

Improving on his Blamey Stakes eighth to Inspirational Girl first-up at big odds, he relished a rise in distance to put nearly four lengths on his closest rival in the Regal Power (2000m).

Rising in grade and going up a kilo in the weights this weekend, Pondus looks a huge hope in a small field sure to appreciate the distance.

The danger following closely at current Mornington Cup odds of $2.80 is the Chris Waller-trained Crystal Pegasus in flying form from gate seven with Craig Williams aboard.

The latest on March 5 at headquarters was a demolition job, Crystal Pegasus winning the Listed Roy Higgins Quality (2600m) by five lengths.

He is down in distance this weekend and is well weighted with 56kg and is still improving.

It looks a wide-open edition of the Mornington Cup this autumn with a further three runners also at single-figures including the Gai Waterhouse & Adrian Bott-trained Sacramento ($6).

An Irish import still winless down under, Dadoozdart chases his breakthrough win on the Aussie turf and co-trainer Wayne Hawkes said that was the ultimate focus and not the Caulfield Cup ballot exemption on offer to the Mornington Cup winner.

“He has been a bit frustrating because he has shown he can do it,” Hawkes told RS NewsWire.

“It’s not about the free kick into the Caulfield Cup, it’s a race worth a lot of money, so it’s worth having a go at.

Rounding out the Mornington Cup field and betting markets are the early market mover White Hawk ($26) out of Tasmania and the $101 roughie of the bunch, four-year-old European import Corbulo ($101), drawn the rails second-up off a disappointing Australian debut.

The 2022 Neds Mornington Cup is set to run as Mornington Race 6 at 3:35pm (AEDT) with full markets courtesy of Ladbrokes.com.au available here.