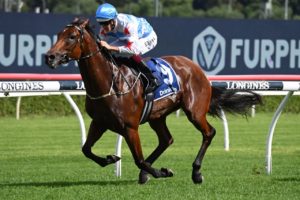 She comes off back-to-back Randwick wins in the wet, the latest a nearly two length effort in the Group 1 Canterbury Stakes (1300m) on a Heavy (9).

While the track is likely to be firmer at Rosehill on Saturday, Forbidden Love remains the one to beat rock-hard fit and versatile from a gun barrier two draw with Hugh Bowman retaining the ride.

The danger occupying the second line of George Ryder Stakes betting at $4.20 is the Annabel Neasham-trained Mo’unga back in Sydney off a lead-up Group 1 Futurity Stakes (1400m) second fresh at Caulfield.

The Savabeel entire won the Rosehill Guineas on this day 12 months ago and has recorded one win since first-up defeating Verry Elleegant in the Group 1 Winx Stakes (1400m) during the spring.

He has been competitive in everything since including a Cox Plate fourth and third to Zaaki in the Mackinnon Stakes over 2000m at Flemington before his Futurity return on February 26.

Also well-supported is the $5 third elect Converge, a dual acceptor also in the field against Anamoe in the Group 1 Rosehill Guineas (2000m) over further on the same race card.

The Gai Waterhouse & Adrian Bott-trained Frankel three-year-old beat Anamoe home in an upset last time out over the mile in the Group 1 Randwick Guineas and fourth-up at Rosehill he is sure to be competitive in whichever option the stable select for him.

In an open market a further two horses are at single-figure George Ryder Stakes odds with Colette ($7.50) and the rails-drawn Private Eye ($8).

Godolphin’s Hallowed Crown mare Colette is winless this campaign and is looking to return to winning form for the first time since her Group 1 Empire Stakes (1600m) victory at Flemington on Derby Day.

She was last seen running a somewhat disappointing eighth behind super mare Verry Elleegant on a Heavy (10) Randwick course in the Group 1 Chipping Norton Stakes (1600m) and gets her chance again here in barrier three for James McDonald.

The Joe Pride-trained Private Eye is also being kept safe for his second-up run, the Al Maher four-year-old having won the Group 1 Epsom handicap (1600m) in an upset in his best known performance last year.

He returned when third to Forbidden Love four lengths off Saturday’s favourite fresh in the Canterbury Stakes and needs to be improving notably to close that gap.

The 2022 George Ryder Stakes is set to run as Rosehill Race 7 at 4:00pm (AEDT) with full markets courtesy of Ladbrokes.com.au available here.