Another elite training performance by the dominant Ciaron Maher & David Eustace stable has seen Hitotsu salute with a powerful two-length victory in the 2021 Victoria Derby results just two starts after breaking his maiden status at Donald. 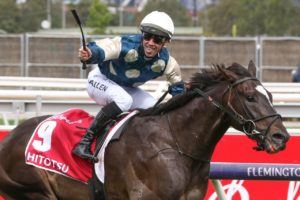 Hitotsu was so dominant late with a gun ride by John Allen in the 2021 Victoria Derby at Flemington. Photo: Ultimate Racing Photos.

Last weekend’s Vase winner Forgot You meanwhile finished around mid-field and failed to required ballot clause for next Tuesday’s Group 1 $8 million Melbourne Cup (3200m), missing his chance to line-up in the 161st edition of the ‘race that stops a nation’.

One of the week’s big market movers for the Group 1 $2 million Penfolds Victoria Derby (2500m), Maurice colt Hitotsu continued his incredible rise through the ranks this season to salute in his Grand Final off an unconventional prep.

Hitotsu is now drawing comparisons to Tuesday’s short-priced Melbourne Cup favourite Incentivise who ran eighth in a Toowoomba maiden earlier this year before securing his last eight on the trot ahead of the world’s richest handicap.

The youngster moved from the care of Wendy Kelly to the Maher/Eustace team after the autumn and broke his maiden status when defeating subsequent Vase runner-up Commander Harry by 1.75 lengths at Donald on September 12.

From there he went to the mile in the Group 1 Caulfield Guineas (1600m) for a credible fifth under three lengths off Anamoe who franked the form with his gallant Cox Plate second last weekend.

The Caulfield Guineas form proved superior again in the time-honoured staying classic for three-year-olds with Hitotsu, backed into $4 favouritism in the Derby, so good late with Cox Plate winning hoop John Allen aboard.

“He’s an interesting horse. Took a long time just to come to hand. We had to be patient, we knew the ability was there,” co-trainer David Eustace told Racing.com.au after the race.

“He just absolutely thrived off his Donald win.

“We were pretty confident coming in today that he’d run a big race.

“Hes only a lightly-raced athletic horse and we backed his ability to stay.

“A hell of a ride from Johnny Allen too.

Irish expat and former star jumps’ hoop Allen enjoyed his 14th career Group 1 to hand a 10th for the Maher/Eustace team with his thrilling ride in the Derby.

“He was just travelling that easy,” winning hoop Allen said.

“Once we could find a smallish gap, he was going to be able to quicken up and he done that he was much too good for them really.

Once into the clear the final furlong, Hitotsu hit another level for Allen and was never in doubt from there.

The horse was last to the home turn, but first to the finishing post showing off a scintillating late turn of foot to suggest he could come back as a contender for next year’s Melbourne Cup as a four-year-old.

It was the Vase third placegetter Jungle Magnate looking to steal the Derby working around the field with 1900m, jockey Luke Currie pressing on to hit the front after a slight incident on the first turn.

With 600m to go, Allen was back to second last on Hitotsu.

After moving up into second, the James Cummings-trained Alegron off a third in Sydney’s Group 1 Spring Champion Stakes went for home having done some work to be on speed and kicking away at the 350m.

Allen however finally got into the clear on Hitotsu and the duo flashed home to easily account for Alegron with the Archie Alexander-trained Teewaters in third again rounding out the Victoria Derby trifecta.