Lightly raced Snitzel filly Yearning left a few jaws on the floor at Caulfield on Wednesday when she took out the Group 1 Thousand Guineas over the mile as a 26-1 pop.

Despite finishing second over the mile at Flemington only 11 days earlier in the Edward Manifold, the Hawkes-trained three-year-old wasn’t fancied in the field of 13, with punters instead piling into the Chris Waller-trained Hinged and the Freedman-trained Zouzarella.

Like he has before, Damian Thornton proved the difference as the pair shuffled right back to the rear of the field. 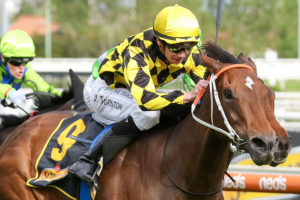 That move proved to be the difference with a good amount of push and shove occurring at the top of the straight, leaving Yearning with daylight out wide as Thornton swooped in to fend off a challenge from the equally brave Elusive Express.

While it looked like a textbook ride, Thornton said afterwards that he thought things would pan out a little differently.

“Probably not how I pictured it pre-race, I thought we’d be a little bit closer than we were, although there looked to be good pressure in the race,” Thornton told Racing.com.

“Wayne (Hawkes) said pre-race, I don’t care where you are, just get her to travel, follow a rhythm, keep her balance and go from there, so I just helped her in the beginning the best I could and just let her tell me where she wanted to be.”

Yearning came off second-best to Elusive Express when she faded late in the Edward Manifold but clearly appreciated getting back further in the run in her second attempt at the mile.

Prior to that, she won her maiden at Newcastle over 1400m, and also handled a heavy track in Sydney on debut for second at Kensington.

As far as the future is concerned though, co-trainer Wayne Hawkes wouldn’t rule out heading to Flemington in a fortnight’s time for a crack at the $1 million Empire Rose Stakes

“We just wanted to see how she’d run today. Her run was good the other day, she got held up, and then she let rip, and the truth of the matter is when she hit the front she half got lost,” Hawkes said afterwards.

“If you watch the replay, she was on her Sydney leg the whole way, whereas today, the first thing I thought was she on her Melbourne leg, and she was.”

The three-year-old is also nominated for the Bondi Stakes at Randwick on October 23 and the Kennedy Oaks, but Hawkes admitted that whatever happens next will only be seen as a bonus.

“Mum’s a Caulfield Cup winner, so I don’t know. We’ll see how she pulls up. The truth of the matter is, she’s done now. Whatever she does here on end is just a bonus. It’s a good position to be in.”

Elusive Express stuck on well for second, while the Freedman-trained Barb Raider filled the minors for third.

Race favourite Hinged finished four-lengths sixth, and there was no late luck for Zouzarella, who failed to make up ground after sitting off the speed.