Montefilia has earned a shot at the Group 1 $5 million Caulfield Cup (2400m) in a fortnight after running out a strong mile and a half in Sydney to salute in the 2021 The Metropolitan results at Royal Randwick. 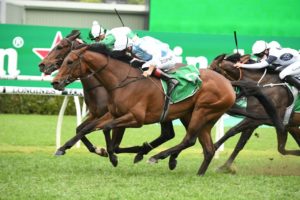 Montefilia is headed to the Caulfield Cup after her good win in the 2021 The Metropolitan in Sydney. Photo: Steve Hart.

In an historic edition of the Group 1 $750,000 The Metropolitan (2400m) jockey Hugh Bowman celebrated his 100th Group 1 winning ride thanks to a brave staying performance by David Payne’s four-year-old Kermadec mare Montefilia.

Third first-up to Think It Over in the Group 2 Chelmsford Stakes (1600m) before a second to She’s Ideel in the Group 1 3 Kingston Town Stakes (2000m), Montefilia answered the critics in The Metropolitan who said she couldn’t run the distance.

From a wide draw (13 of 17), Bowman had the mare settled out wide in the second half of the field as Spirit Ridge eventually rolled forward to take up the lead.

Entente meanwhile started to improve his position mid race with Tim Clark moving up on the Gai Waterhouse & Adrian Bott-trained favourite who was having his third start in as many weeks after winning his way in via last Saturday’s Group 3 Colin Stephen Quality.

There was a change of positions with 600m left to travel, Dashing Willoughby going up to lead before quickly dropping out.

There were plenty of challenges on the straight with the likes of Hush Writer and Spirit Ridge looking a chance before Montefilia pushed through to put her head in front at the 150m.

Entente came with her and the duo hit the line together forcing a thrilling photo finish that went the way of Montefilia the outside by the bob of the head.

In third rounding out The Metropolitan trifecta was Harpo Marx for Bjorn Baker at 25/1.

Payne was quick to name the Caulfield Cup on October 16 as the next-up assignment for Montefilia after she proved herself over the distance.

“She did it a bit tough three wide most of the way,” he told Sky Thoroughbred Central.

“She’ll go to the Caulfield Cup, why not? She gets the trip I think and she’ll have less weight.”

Tawqeet (2006) is the latest of three horses who have completed The Metropolitan – Caulfield Cup double.

All-in Caulfield Cup 2021 betting markets at Ladbrokes.com.au on Montefilia to be the next are into $15 and are available in full here.