A line-up of potential Group 1 Flight Stakes-bound fillies do battle in the Furious Stakes 2021 field this weekend in Sydney in one of the key features on the Chelmsford Stakes Day program. 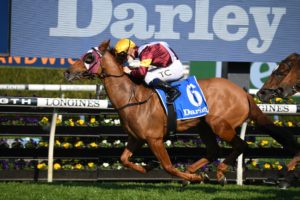 Fourth in the Group 1 Golden Slipper and Inglis’ Sires over the autumn, Snitzel filly Four Moves Ahead made a strong return in the Group 2 Silver Shadow Stakes (1200m) a fortnight back when running a close third under a length beaten in the opening leg of the Princes Series of races.

She will be fitter for the run and deserves to be near the top of the market, but does have work to do from the outside alley on Saturday in the second leg.

Chris Waller chases a third Furious Stakes victory having prepared Winx (2014) and Foxplay (2016) for their respective wins and is represented on Saturday by his returning I Am Invincible filly She’s All Class.

Third in the Gold Coast’s $2 million Magic Millions Classic back in January, she’s had just the one run since when runner-up to Four Moves Ahead in February’s Group 2 Sweet Embrace Stakes (1200m).

She may lack the experience of many of her rivals and it has been six months between runs, but the bookies are taking no chances.

A further three fillies are also under $10 in the Furious Stakes betting markets this spring including the $5 on offer for the Peter & Paul Snowden-trained Najmaty for last year’s winning stable.

Team Snowden took out the Furious in 2020 with Dame Giselle and also prepared Pure Elation for her 2018 victory.

They chase a third win in four years this weekend with their daughter of I Am Invincible Najmaty to be ridden second-up from barrier nine with Hugh Bowman aboard.

Bowman replaces John Allen in the saddle as the filly comes off a Melbourne lead-up run having run fourth first-up in Caulfield’s Group 3 Quezette Stakes (1100m) in mid-August.

Swift Witness is next best in betting at $6.50, the Gai Waterhouse & Adrian Bott-trained Star Witness filly coming off a narrow first-up win in the Group 2 Silver Shadow Stakes (1200m).

She is out to be the third filly in as many years to complete the Silver Shadow – Furious Stakes double following on from Libertini (2019) and Dame Giselle (2020).

Swift Witness is out to be the third filly in as many years to complete the Silver Shadow Stakes – Furious Stakes double Bet now with Ladbrokes.com.au

Rounding out the single-figure hopes is then the untapped De An Andretti ($9) for Ron Quinton having just her second career start on the weekend.

Another I Am Invincible filly in the line-up, she won her debut at Hawkesbury in mid-April and has been excellent in two recent Randwick trial wins ahead of her first-up acid test in the Furious.