2021 George Ryder Stakes Results: Think It Over Into Doncaster

Kerry Parker’s underrated galloper Think It Over is into the Group 1 $3 million Doncaster Mile (1600m) with a light weight on the back of a huge effort to salute in the 2021 George Ryder Stakes on Slipper Day. 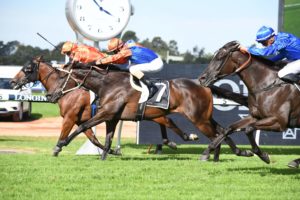 Think It Over enjoyed an upset 2021 George Ryder Stakes win to earn a start in the $3 million Doncaster Mile. Photo: Steve Hart.

The mighty mare Winx (2016) was the last to do the George Ryder – Doncaster Mile double, and there is sure to be a big move on the progressive So You Think five-year-old Think It Over after his upset in the former at Rosehill.

First-up winner at a blowout price in Randwick’s Group 3 Liverpool City Cup (1300m), the horse was good again last time out on March 13 when runner-up carrying 58kg in the Group 2 Ajax Stakes (1500m).

Champion hoop Glen Boss continued associations for the gelding’s acid test up in grade for the Group 1 $1 million George Ryder Stakes (1500m) at weight-for-age and was able to celebrate his 89th career Group 1 with the upset result aboard the tough 25/1 roughie.

For Parker it was his second elite level success following that of Dark Dream in the 2018 Queensland Derby, and he was full of post-race praise for both the horse and Boss.

“Just a gun ride by Bossy, he took all the short cuts today.

After fighting off Samadoubt for the front position, it was Dawn Passage leading this year’s George Ryder Stakes field around while the Godolphin-raced favourite Avilius travelled around in last.

Onto the straight, Dawn Passage was still leading before a big move by the evergreen Dreamforce up the inside rallying hard at the 100m to hit the front.

There was a wall of horses coming for him the closing stages however and it was Boss up the middle on Think It Over who got top honours ahead of the John Thompson-trained eight-year-old Dreamforce.

Rounding out the George Ryder Stakes trifecta after making up the ground from last to first was the beaten favourite Avilius just ahead of his stablemate Cascadian who had also run at the back of the pack throughout.

It is now into the 2021 Doncaster Mile on Day 1 of ‘The Championships’ at Randwick for the surprise George Ryder Stakes winner Think It Over who drops right back from 59kg at WFA to just 52kg for the handicap classic.

“Taking seven kilos off him back to the Doncaster…he still gets his 52 so absolute wrapped,” Parker said.

“I was still borderline (making the Doncaster field). That was always his aim. Randwick on the big track, you go into it looking a live chance now.

“He’s been a hell of a ride this bloke. To watch him mature and turn into the racehorse he has become has just been very pleasurable.”

All-in Doncaster Mile 2021 odds at Ladbrokes.com.au on Think It Over have been slashed from $26 into $13 and are available in full here.