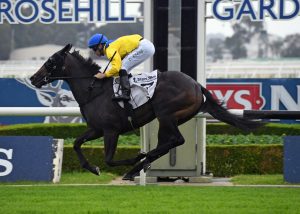 The to-date brilliant daughter of Hinchinbrook lines-up in a capacity filed of two-year-olds in the Restricted Listed $2 million 2020 Inglis Millennium (1100m) in what is shaping-up as one of the highlights of the weekend’s racing action.

Drawn a treat in gate five with Tommy Berry to ride, Cellsabeel chases her second win on the trot after an effortless six length romp home in the wet at Rosehill on January 18.

Improving notably on her debut fourth behind Dame Giselle in the $1 million Golden Gift (1100m) from November, the first-up victory shot Cellsabeel to the top of all-in Golden Slipper betting at Ladbrokes.com.au.

Currently she is at a quote of $5.5 to win the world’s richest race for juveniles, with the $3.5 million Group 1 Golden Slipper Stakes (1200m) running at Rosehill Gardens on March 21.

She is much shorter in the Inglis Millennium odds for Saturday paying just $1.50 to salute for the punters and continue her charge towards the Sydney Autumn Racing Carnival’s juvenile features.

After her runaway six length effort last time out the stable were quiet about the Slipper lead-up for Cellsabeel.

With stablemate Away Game winning the Group 3 Widden Stakes last Saturday in Sydney booking her spot in the Golden Slipper field however, the Inglis Millennium target was confirmed for Cellsabeel.

“She is going great and ticking along lovely,” co-trainer Maher told the media.

Following the Slipper favourite in Inglis Millennium betting for Saturday is the John Sargent-trained Encountabull ($6.50) who also drew well in gate two.

The Bull Point colt has had two previous runs in Inglis-restricted races when fourth to Ideas Man on Cox Plate Day at The Valley and second in December’s Inglis Nursery at Randwick behind Wild Ruler.

Click here to bet on Cellsabeel this weekend through Ladbrokes.com.au.