The BRC Sires' Produce Stakes is a Group 2 race run at Eagle Farm Racecourse on Kingsford Smith Cup Day as a lead-up to the JJ Atkins each Brisbane Winter Racing Carnival. 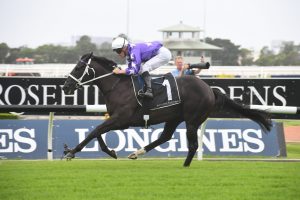 Many of the race entrants will come via a run in Doomben’s Group 2 Champagne Classic (1200m) held at Doomben Racecourse a fortnight earlier and will continue onto a Stradbroke Handicap Day run in the Group 1 JJ Atkins (1600m), a double last achieved by Sizzling (2012).

The BRC Sires’ Produce Stakes 2019 ran on Saturday Saturday May 25, 2019 and was won by the Peter & Paul Snowden-trained Strasbourg.

The BRC Sires’ Produce Stakes 2019 results saw Team Snowden’s expensive colt Strasbourg cement his future value at stud with a narrow victory over the $3.80 favourite Accession, who was brave in defeat, ahead of a Group 1 run in the JJ Atkins over the mile in a fortnight.

The week of Kingsford-Smith Cup Day, bookmakers around the country including Ladbrokes.com.au release the official BRC Sires’ Produce Stakes 2019 odds and the updated markets following the final acceptances will be available right here.

The BRC Sires’ Produce Stakes field attracts a line-up of smart winter two-year-olds that may have had an earlier Sydney Autumn Racing Carnival campaign interstate. Plenty of the youngsters in the field are having their first look at the 1400m distance and graduates out of the Champagne Classic two weeks earlier at Brisbane’s other key track – Doomben – make-up a large number of the BRC Sires’ Produce Stakes final acceptances.

The 2019 BRC Sires’ Produce Stakes Final Field & Barriers are set for release on Wednesday May 22 and will be published in full below.

The official BRC Sires’ Produce Stakes field drew a line-up of 15 quality two-year-olds including the Gai Waterhouse & Adrian Bott-trained Stratum colt Czarson coming off a lead-up second in the Champagne Classic behind Kingsford Smith Cup hopeful Dubious. Peter & Paul Snowden saddle-up the only last start winner in the field with Redoute’s Choice colt Creator coming off a victory at Hawkesbury from April 27.

Update: The 2019 BRC Sires’ Produce Stakes field is down to 13 starters after the early scratching of the John O’Shea-trained TWENTYFOUR CARAT (6) and ROTHENBURG (13) who had drawn near the outside

The official BRC Sires’ Produce Stakes 2019 nominations are out the Monday of race week.

First won by Goldfinder in 1913, the BRC Sires Produce Stakes has held Group 2 status since 2006 and also between 1980 and 1986. Although the event was not held for four years from 1942 to 1945 there have been several notable winners including Tulloch in 1957.

The Champagne Classic/Sires Produce Stakes double has been won by only two recent horses, Virage de Fortune (2005) and Lovely Jubly (2002). Since 1989, the fastest winning time was recorded by Lovely Jubly in 2002 with 1 minute 21.4 seconds while the slowest time was by Zamoff in 1989 with 1 minute 27.7 seconds.

BRC Sires Produce Stakes results, winners and winning times since 2000 are below.