The Zeditave Stakes is a Group 3 sprint held at Caulfield Racecourse on Blue Diamond Stakes Day during the autumn. 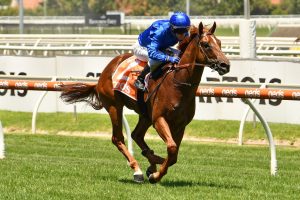 The Zeditave Stakes is a Group 3 race held at Caulfield Racecourse in Melbourne on Blue Diamond Stakes Day each February.

Held over 1200m under set weights plus penalties conditions, the Zeditave Stakes pays $160,000 prize money. It is a fairly lucrative race for that time of year, and is often employed as a lead-up race to the autumn carnival at Caulfield. With so many major races following it, many trainers direct their better three year olds towards this race.

The 2020 Neds Zeditave Stakes ran on Saturday February 22, 2020 at Caulfield Racecourse and was won by the in-form He’ll Haunt Us.

Progressive Time For War gelding He’ll Haunt Us celebrated his second win on the trot backing-up from the $250,000 Magic Millions Maiden win at the Gold Coast last month to narrowly take out the Zeditave Stakes 2020 results following a peace of a ride by Damien Oliver who snuck up late on the inside of Sansom (2nd) and Spend (3rd) with under a half-length separating the trifecta. The Godolphin-raced favourite Pandemic was also far from disgraced in the blanket finish running a close fourth.

The official Zeditave Stakes 2020 betting odds will be available below as soon as markets on the sprint for three-year-old colts and geldings are released by Ladbrokes.com.au this autumn.

The official Zeditave Stakes 2020 field and barriers will be released below the Wednesday leading up to Blue Diamond Stakes Day 2020.

The 2020 Zeditave Stakes final field features just the seven runners led in betting by the Godolphin-raced Pandemic coming off a first-up win at Randwick.

The Zeditave Stakes was a listed event prior to 2013, when it received an upgrade to Group 3 status. It became a feature event for the first time in 2014, having previously been held on Blue Diamond Stakes Day.

The race is named after the 1988 winner of the Blue Diamond Stakes and renowned sprinter Zeditave.

Previously restricted to colts and geldings, the Zeditave Stakes is now an open event, allowing many horses to employ it as a leadup event.

Notable Zeditave Stakes winners include Almurtajaz (1989), Blaze The Turf (1998), Not A Single Doubt (2005) and Not Listenin’tome (2014). Zeditave Stakes results and winning times are listed below.