The Southern Cross Stakesis a Group 3 sprint held at Royal Randwick on Apollo Stakes Day in February during the Sydney Autumn Racing Carnival. 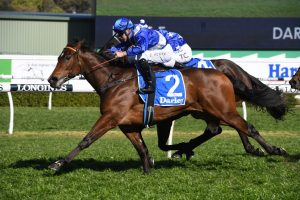 The Southern Cross Stakes is a Group 3 race run at Royal Randwick on Apollo Stakes Day in February during the Sydney Autumn Racing Carnival.

Some of the better sprinters may head south for a shot at the Group 1 sprints of the Melbourne Autumn Racing Carnival such as the Group 1 Futurity Stakes (1400m) at Caulfield on Blue Diamond Stakes Day or the Group 1 Newmarket Handicap (1200m) at Flemington in March.

Later in Sydney the top horses could shoot for a run in April’s Group 1 TJ Smith Stakes (1200m) at Royal Randwick during ‘The Championships’.

The Southern Cross Stakes 2020 ran on Saturday February 15, 2020 and was won by the Kris Lees-trained favourite Special Reward.

The Kris Lees-trained Special Reward ($3) may not have wanted to go into the gates pre-race, but once there the horse was too good for his rivals charging home for a quarter-length win over the well-backed market mover Cascadian ($3.30) who flew home late down the outside but just couldn’t get there in time. Veteran wet tracker Jungle Edge ($7) led early before being run down to eventually finish a brave third.

The latest Southern Cross Stakes 2020 odds and betting market links courtesy of Ladbrokes.com.au will be available right here once announced the week of Apollo Stakes Day.

The Southern Cross Stakes field attracts a quality line-up of usually local Sydney sprinters at the start of their autumn racing campaigns and is released by Racing NSW on the Wednesday before the race.

The official 2020 Southern Cross Stakes Field & Barriers are set for release on Wednesday February 12, 2020 and will be published in full below.

The Southern Cross Stakes nominations are a first look at the possible sprinters to run in the Apollo Stakes Day support act and close on the Monday before race day.

The Southern Cross Stakes 2020 nominations close on Monday February 10, 2020 and will be released below as soon as available.

The race started out as a Principal race, gained Listed status in 1980 and has been run as a Group 3 event since 1989. It has gone by a number of different race names over the years including the Frederick Clissold Handicap, Anniversary Cup and has been known as the Southern Cross Stakes since 2009. The race has also been conducted at a number of Sydney’s racecourses including Canterbury Park and Rosehill Gardens.

See below for a full list of Southern Cross Stakes winners and results going back to the year 2000.