The Magic Night Stakes is a Group 3 race run at Rosehill Gardens offering a Golden Slipper ballot exemption to the winning two-year-old filly. 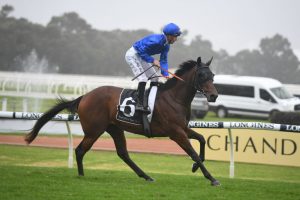 Held during the Sydney Autumn Racing Carnival in March, the Magic Night Stakes is a Group 3 sprint for two year old fillies. As a set weights race, the fillies are required to carry 55.5kg over the 1200m distance at Rosehill Racecourse. Worth $175,000 in prize money, the event is run on Coolmore Classic Day.

The Magic Night Stakes 2020 ran on Saturday March 14, 2020 and was won in an upset by last year’s winning stable Godolphin with Thermosphere.

Godolphin trainer James Cummings is in with a shot at back-to-back Golden Slipper wins after the upset 2020 Magic Night Stakes win by his in-form filly Thermosphere  ($19) who is now out to emulate stablemate Kiamichi who did the Magic Night – Golden Slipper double in the wet at odds last autumn.

The updated Magic Night Stakes 2020 betting odds on the Golden Slipper Stakes-bound fillies will be listed below with market links to Ladbrokes.com.au the week of the race.

The 2020 Magic Night Stakes field and barriers will be released by Racing NSW on Wednesday March 11, 2020 and published in full below.

First held in 1978, the Magic Night Stakes was won by Jubilee Walk under M. Johnston.

The full Magic Night Stakes results going back to 2000 are listed in the table below.