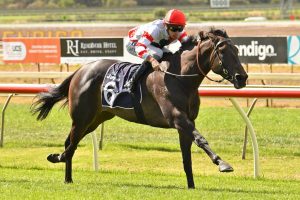 The TS Carlyon Cup is a Group 3 status race for milers run at Caulfield Racecourse on C.F. Orr Stakes Day in February.

CF Orr Stakes Day is the first Group 1 race meeting of the Melbourne Autumn Racing Carnival and is headlined by the CF Orr Stakes (1400m). A number of Group 2 and 3 status races also take place on the card including the Group 2 Rubiton Stakes (1100m), Group 2 Autumn Stakes (1400m), the two Blue Diamond Prelude races and the TS Carlyon Cup.

Contested over 1600m the Carlyon Cup is an open set weights plus penalties event offering $160,000 in total prize money. Horses may come into the Carlyon Cup field via an earlier summer – autumn lead-up or contest the event first-up.

The TS Carlyon Cup 2020 ran on Saturday February 8, 2020 at Caulfield Racecourse and was won in impressive fashion by the well-backed mare Miss Siska.

The week of CF Orr Stakes Day the TS Carlyon Cup 2020 betting odds and market links will be available below.

The Carlyon Cup field attracts a good type of middle-distance galloper each autumn and is released by Racing Victoria on the Wednesday before CF Orr Stakes Day.

The official 2020 TS Carlyon Cup field and barriers will be announced on Wednesday February 5, 2020 and published in full below.

A line-up of 10 potential Australian Cup horses will face off in Saturday’s 2020 TS Carlyon Cup field including the 60kg topweight Harlem resuming for Lindsay Park in barrier one and the clear favourite in betting, Miss Siska drawn the outside alley.

The TS Carlyon Cup 2020 nominations close on Monday February 3, 2020 and will be released below as soon as available.

See below for the full Carlyon Cup winners and results going back to 2000.