The Furious Stakes is a Group 2 race for three-year-old fillies held at Royal Randwick as a lead-up to the Flight Stakes each spring. 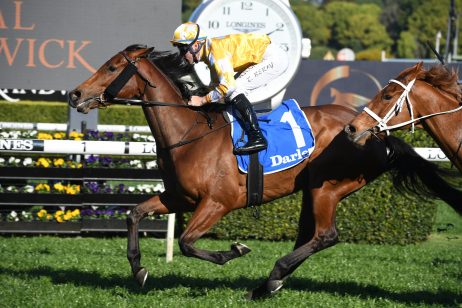 The Group 2 Furious Stakes is a set weight race for three year old fillies held at Randwick Racecourse in Sydney. Held in early September during the Sydney Spring Racing Carnival, the 1200m event is worth $200,000 in prize money.

Many fillies will first race in the Silver Shadow Stakes held two weeks earlier. Formality (2017),  Libertini (2019) and Dame Giselle (2020) are the most recent fillies to complete the Silver Shadow – Furious Stakes double.

The better performing fillies will then advance to the Group 2 Tea Rose Stakes (1500m) held at Rosehill Gardens. Foxplay (2016) was the last to take out the Furious Stakes – Tea Rose Stakes double.

The Furious Stakes is part of the ‘Princess Series Of Races’ and the Group 1 Flight Stakes (1600m) over the mile at Randwick on Epsom Handicap Day completes the series.

The Furious Stakes 2020 ran on Saturday September 5, 2020 and was won by the Silver Shadow winner Dame Giselle.

Dame Giselle ($3.80) over came a run three-wide back the trip to salute for the punters in the 2020 Furious Stakes results, the Silver Shadow winner making it two-from-two this Princess Series heading towards the Group 1 Flight Stakes over a mile.

Click here to read more on the brave 2020 Furious Stakes win by the in-form Dame Giselle.

The season’s top Furious Stakes odds and betting markets will be available below the week of the race courtesy of Ladbrokes.com.au.

The official Furious Stakes 2020 Field & Barriers are announced the Wednesday of race week and the full line-up of Flight Stakes-bound fillies will be published right here.

Update: #6 La Vernazza (9) was scratched on Thursday after being found to be lame in her near hind leg post her work that morning.

Click here to read more on the key fillies in the Furious Stakes 2020 field and betting markets.

Nominations for the Furious Stakes in 2020 close the Monday leading up the race and the full list of early entries will be published below.

Originally a Listed race, the Furious Stakes became a Group 3 race between 1995 and 2004 until it was elevated to Group 2 status.

Accomplishing the Furious Stakes/Tea Rose Stakes/Flight Stakes treble is a hard victory but has there have been three successful fillies including Unwordly (2000), Danglissa (1999) and Sunline (1998).