The Group 2 The Roses is traditionally held on Doomben Cup Day during the Brisbane Carnival as a Queensland Oaks lead-up. In 2020 COVID-19 saw the race held in June at Eagle Farm over 1800m. 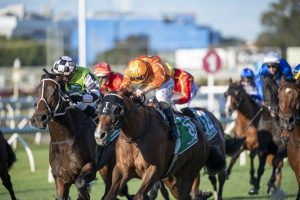 The Roses, formerly known as the Doomben Roses, is held annually in either May or June as part of the Brisbane Winter Racing Carnival. Traditionally run at Doomben Racecourse, The Roses pays a total of $200,000 in prize money and takes place on Doomben Cup Day.

In 2020 the Brisbane Winter Racing Carnival was reduced and many races rescheduled due to COVID-19 including The Roses, which was moved to the weekend after Stradbroke Handicap Day and run at Eagle Farm Racecourse over a shorter 1800m distance offering $175,000 in prize money.

Raced over 2000m, the Group 2 The Roses is run under set weights conditions and is open to three-year-old fillies as a key lead-up to the following month’s Group 1 Queensland Oaks (2400m).

The Doomben Roses was upgraded to a Group 2 event for the 2014 edition, having previously been run as a Group 3 race since 2003.

Two fillies throughout history have completed The Roses – Queensland Oaks double with Ethereal (2001) and Scarlett Lady (2011). Ethereal also went on to take out that year’s Melbourne Cup over the two miles at Flemington making her the most famous of all The Roses winners.

The Roses 2020 results went the way of the punters with the well-backed Toby & Trent Edmonds-trained Vanna Girl ($2.10) extending her winning streak to four straight with a brilliant late finish in the Group 2 at Eagle Farm.

Click here to read more on the dominant The Roses 2020 winner Vanna Girl.

The Roses 2020 betting odds for the winter will be available below complete with market links to Ladbrokes.com.au the week of the race.

Vanna Girl ($2.10 in 2020) was the last favourite in The Roses betting to salute for the punters.

The Roses field attracts the season’s top three-year-old staying fillies coming off a lead-up run in either an earlier Queensland race like the Gold Coast Bracelet or possibly the Group 1 Australasian Oaks (2010m) in Adelaide, and is the last of the traditional Queensland Oaks lead-up races.

The official 2020 The Roses field & barriers will be announced below the Wednesday of race week.

The Roses 2020 final field attracted a capacity line-up of 14 fillies plus a single emergency, Hallowed Girl who drew the inside alley. Race favourite Vanna Girl suffered an early blow out in barrier 13 as the recent dual Black-Type winner chases a fourth win on the trot for last weekend’s Stradbroke winning trainers Toby & Trent Edmonds.

Click here to read more on the key fillies in The Roses 2020 field.

The Roses nominations are usually announced on the Monday before race day with the full list of early entries to be published below once announced.

The 2020 The Roses nominations are now out with 17 three-year-old fillies entered for the event including Toby & Trent Edmonds’ flying Vanna Girl chasing her fourth win on the trot and third in Black-Type company following her recent victories in the Listed Daybreak Lover Stakes and Pam O’Neill Stakes at Doomben.

Click here to read more on the key 2020 The Roses nominated fillies this winter.

Inaugurated as the Doomben Roses, from 2010 onwards the race has been known simply as The Roses.

Doomben Roses results since 2000 are listed below.