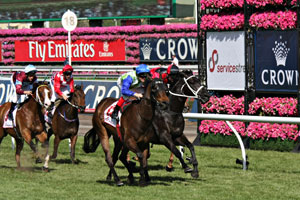 The Melbourne Cup Trifecta is a great exotic bet selection for punters that want to not only back the Melbourne Cup winner, but get behind the first three horses over the line at Flemington Racecourse on the first Tuesday of November each year.

With the 2019 Melbourne Cup scheduled to run on Tuesday November 5, 2019 , now is the time start to look at the early favourites for the iconic two mile clash and formulating your Melbourne Cup trifecta betting tips.

Not only do you get to barrack for a number of horses when you place a trifecta Melbourne Cup bet at Ladbrokes.com.au, but you will also enjoy a bigger winning payout if successful on Melbourne Cup Day.

The reason Melbourne Cup trifecta winnings are so much higher than those paid out on a simple Win or Place bet is because fewer punters pick the correct result compared to the total size of the trifecta prize pool.

What is a Melbourne Cup Trifecta

For those who haven’t placed a trifecta in a while, here is a brief reminder of what it involves – you must pick the first three finishers in exact order. It’s difficult to predict these exact Melbourne Cup results, so most punters go with a 3 horse box trifecta instead to cover all combinations of their picks. The reward for getting your trifecta pick right is getting paid out at a much better rate than the regular Melbourne Cup odds will offer for a straight-up win.

The reason the winnings are so high is because only a small number of bettors would have picked the correct result compared to the total size of the trifecta prize pool.

An example of a winning Melbourne Cup trifecta from 2017 was:

How to Pick the Melbourne Cup Trifecta

Accurately picking the Melbourne Cup trifecta isn’t all a matter of luck, though that certainly helps. For the most part, punters who make a successful pick do so based on an evaluation of the runners’ performances over the spring season. They are often actively betting at Ladbrokes.com.au on many other races as well, keeping up to date with what’s going on.

Compare the performance of other horses against the runner you think will be the Melbourne Cup champion. Look at previous races, times they finished in similar distances on the same track, how they perform in different conditions, how they behave under different jockeys, etc. Once you’ve taken that into account, you should have a pretty good idea of what you think the most logical Melbourne Cup trifecta pick should be.

‘Logic’ is the watchword in all of this. While you can’t be right every time, you will have the best outcome over the long run by making Melbourne Cup trifecta picks based on sound logic that is informed by previous results. Again, spending time betting on other races at online bookies like Ladbrokes.com.au can be great preparation for picking a Melbourne Cup trifecta later in the season.

Where to Place a Melbourne Cup Trifecta

Where you place your Melbourne Cup trifecta matters, as you want to get the best odds and have the least confusion placing your bet. While mistakes placing bets can work out for the best – one man famously won $2.6 million on accidental Melbourne Cup trifecta bets in 2003 – you generally want to be sure you are placing the bets you intended to.

We recommend you place your Melbourne Cup trifecta at online betting sites like Ladbrokes.com.au.  This is an excellent bookie that has very competitive odds and frequently offer special deals on exotic horse racing bets. If you are new to betting online, then we suggest you start with Ladbrokes.com.au and become familiar with its easy betting interface.

If you can’t decide on the exact finishing order of the first three horses but think you know which ones will finish in the top few places then you should consider a Melbourne Cup box trifecta.

This makes your final bet (5X4X3)X$1 to equal $60. The advantage of a Melbourne Cup box trifecta is that it gives you a better chance of winning than a single trifecta, while still paying well if you do win.

Make sure to keep an eye on the special exotic and spring betting promotions running at Ladbrokes.com.au over the Melbourne Cup Carnival to get even better offers on your Melbourne Cup trifectas.