The punters are in with a tough task in the 2020 WA Guineas betting markets on the capacity field of three-year-olds at Ascot on Saturday with current markets co-led by Dom To Shoot and Gemma’s Son. 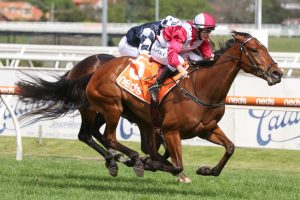 A full field of 16 starters plus emergencies is engaged for this season’s Group 2 $500,000 WA Guineas (1600m) run on Railway Stakes Day this weekend in Perth.

A key early feature of the Perth Summer Racing Carnival, the set weights mile showdown always attracts plenty of class as is the case again in 2020.

It is a wide-open betting affair on the final field however with $5.50 on offer at Ladbrokes.com.au for the two highest-rated youngsters in the race.

The Sean & Jake Casey-trained Dom To Shoot (9) has a solid Ascot track record (9:3-3-0) and is looking to return to winning form and atone for his last start seventh in the Listed Fairetha Stakes (1400m) from November 7.

Gemma’s Son meanwhile has drawn further out in the WA Guineas field with gate 13 for the classy Snippetson colt to overcome as he looks to add to his strong record of five wins from nine starts to date.

Last start Gemma’s Son ran a close fourth only two lengths off the winner Kay Cee in the Group 2 Lee Steere Stakes (1400m) and Saturday has him up over the 1600m for the first time.

Occupying the third line of WA Guineas betting at $6 is Western Empire, the bookies keeping the first emergency very safe in the markets.

Prepared by the state’s best – Grant & Alana Williams – and to be ridden by the ‘Wizard of the West’ Willie Pike back from his outstanding Melbourne Spring Racing Carnival, Western Empire is a lightly-raced maiden having just his third run should he gain a start in the half-a-million-dollar showdown.

Drawn out wide (16), the untapped son of Iffraaj was last seen running a devastatingly close second in a photo-finish Fairetha Stakes result that he is tipped to improve on should he get a chance this weekend in tougher company.

A further two runners are under double-figures in the latest markets with Brave Angel ($8) and Magical Dream ($9) considered the dangers.

The Simon Miller-trained Tavistock filly Brave Angel has winning form up to 1500m having won over that distance at this track by two lengths in late October.

She ran last weekend and was third in a blanket finish only a quarter-length off the winner in the Group 3 WA Champion Fillies Stakes (1600m) and looks a genuine chance to improve on that on the quick back-up.

Magical Dream is another representative for G & A Williams, the daughter of Dream Ahead drawn the second widest alley (18 into 15) as she chases her first win since the Listed Belgravia Stakes (1200m) back on October 24.

Dan Morton’s Fairetha Stakes winning All American gelding Kallaroo meanwhile is at $10 to do the double and beat home a number of the same rivals over further on Saturday.

Symon Wolfe’s I’m all The Talk filly Watch Me Dance is also listed at WA Guineas odds of $10 on the back of her upset win at 20/1 in last weekend’s WA Champion Fillies Stakes.

She is one of the few Guineas hopefuls proven at the mile and did it tough in the wet last Saturday so could prove a value bet to beat home the boys here.