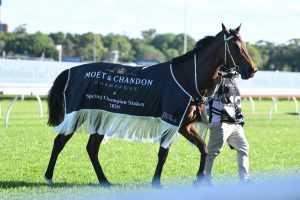 Montefilia is odds-on favourite and the Races.com.au tip to win the 2020 VRC Oaks. Photo: Steve Hart.

Following on from the all-international trifecta led by Twilight Payment in the 2020 Melbourne Cup on Tuesday, the attention now turns to the three-year-old staying fillies facing off in the Group 1 $1 million Kennedy Oaks (2500m).

The VRC Oaks field features 14 runners this season, but markets at Ladbrokes.com.au are dominated by Payne’s daughter of Kermadec, Montefilia at $1.85 after drawing barrier five.

She comes off the historic Group 1 Flight Stakes (1600m) – Spring Champion Stakes (2000m) double in Sydney, the latter seeing her beat home the boys to become the first filly in history to win both races.

Now she heads south to Flemington where she will be tested again the other way of going getting up over the 2500m.

The markets suggest she will run out the distance and give jockey Hugh Bowman some kind of consolation after his horror Melbourne Cup run when aboard the ill-fated Anthony Van Dyck.

Two other fillies are currently also under $10 for the win with the “dangers” tipped to be Thousand Guineas runner-up Personal ($6) and the Mark Newnham-trained Miravalle ($6.50) drawn in barriers 10 and six respectively.

The Tom Dabernig & Ben Hayes-trained Fastnet Rock filly Personal is turning into somewhat of a perennial placegetter having run second in her three latest starts.

She is the early VRC Oaks betting market mover with money suggesting she can finally shrug that status and secure her first victory since breaking her maiden status second-up as a two-year-old at Randwick in September last year.

Jockey Damien Oliver has enjoyed three VRC Oaks winning rides since 2002 including his success aboard last year’s winner Miami Bound (2019) and has won five in total, and he continues his association with Personal on Thursday.

After her Thousand Guineas second to Odeum, Personal stepped-up to 2000m in Flemington’s Group 2 Wakeful Stakes and was far from disgraced running just a quarter-length back second to Victoria Quay.

Without Victoria Quay pressing onto the Oaks, Personal is the best out of that race looking to frank the form while the third-placed Tyche Goddess ($17) is also in the $1 million rematch this week for the Trent Busuttin & Natalie Young training duo.

While admitting that Montefilia is the filly to beat on Thursday, co-trainer Dabernig remains confident in their runner and her ability off a strong spring campaign.

“We’re on our home turf and have been able to stick with our routine,” Dabernig told Mediality Racing this week.

“The important thing is that she has pulled up well. We can’t fault her.

“The Wakeful has been a good guide to the Oaks so hopefully it is again.

“I reckon there is some improvement to come also, she blew up a bit over the back.”

Miravalle meanwhile has won just one of her six career starts to date, the Redoute’s Choice filly most recently seen running fourth in the Wakeful Stakes from a wide barrier (13 of 14).