It is a two-horse affair in 2020 Darley Sprint Classic betting this weekend at Flemington with the reigning champion Nature Strip and last-start The Everest runner-up Bivouac tipped as the ones to beat down the straight. 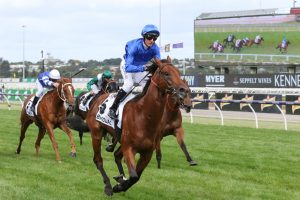 Bivouac is one of the top hopes in Saturday’s 2020 Darley Sprint Classic field at Flemington. Photo: Ultimate Racing Photos.

The final day of the Melbourne Cup Carnival takes place at HQ on Saturday featuring a double shot of Group 1 racing action including the $1.5 million Darley Sprint Classic (1200m) held down the iconic ‘Straight Six’.

This season’s VRC Sprint Classic field features 10 hopefuls including the Chris Waller-trained Nature Strip who won the race 12 months ago on the back of a fourth in Sydney’s The Everest.

This season the now six-year-old returns chasing his first win since the TJ Smith Stakes at Randwick in the autumn and is out to atone for his disappointing seventh in this year’s The Everest results.

Hugh Bowman comes aboard and there is money to suggest that Nature Strip can bounce back and return to his better form.

He currently pays $4.20 in the latest Darley Sprint Classic odds online at Ladbrokes.com.au and sits second in the markets only to the Godolphin-raced Bivouac ($3.70).

Jumping from barrier six with Glen Boss aboard third-up, four-year-old Exceed And Excel stallion Bivouac hasn’t won a race since he took out the Group 1 Newmarket Handicap (1200m) at this track and distance by a commanding 2.5 lengths with Boss board in the autumn.

He has been competitive in plenty since including his second to runaway The Everest champion Classique Legend from October 17.

Returning to Flemington for the first time since his Newmarket triumph in a winnable edition of the Darley Classic and the punters are keen to get behind him.

Two other runners are also under double-figures in the current Darley Sprint Classic betting markets with early mover Libertini ($7) for trainer Anthony Cummings and the 2018 champion Santa Ana Lane ($8.50) out to make history as the first dual winner on non-successive years.

Talented I Am Invincible mare Libertini stole the show first-up in the Group 2 Premiere Stakes (1200m) defeating Classique Legend first-up before her eighth to the same horse in The Everest.

She’s third-up here and yet to win at Flemington, but is four-from-eight over the 1200m and not without her claims from barrier five with Damien Oliver in the saddle.

It would be some effort should the veteran eight-year-old Santa Ana Lane win a second VRC Sprint Classic here, the $8.2 million earner not having won a race since his 2019 TJ Smith Stakes victory.

Since then however he’s placed second in the 2019 The Everest, finished next best behind Nature Strip in the 2020 TJ Smith Stakes and was midfield last time out in The Everest.

Also in the mix at longer odds are a trio of last-start winners with Manikato Stakes champ at The Valley Hey Doc ($10), the rails-drawn Graff ($16) and Flemington specialist Zoutori ($10) coming off the Group 2 Bobbie Lewis – Gilgai Stakes double at the track.