The Gai Waterhouse & Adrian Bott-trained Shout The Bar held on in a diving photo-finish 2020 Empire Rose Stakes result to defeat the Thousand Guineas winning filly Odeum in the Group 1 on Derby Day. 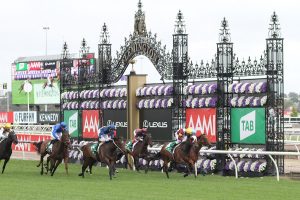 Going around at a huge price in betting on the Group 1 $1 million Empire Rose Stakes (1600m) at Flemington, four-year-old Not A Single Doubt mare Shout The Bart showed great tenacity in a late fight to post her second career Group 1.

Winner of the Group 1 Vinery Stud Stakes (2000m) as a lightly-raced filly in the autumn, Shout The Bar atoned for three unplaced runs this prep leading up to her return to elite level.

“Incredible mare for us, obviously what she did for us in her very first campaign was quite special, winning a Group 1 at I think it was just her fourth career start, I think that was a sign of good things to come,” co-trainer Bott told Racing.com after the win.

“While she hadn’t quite had the runs on the board this preparation, we were happy with the performances and it was good to see her really bounce back today. It was it was a good, tough, strong win.”

Jockey Damien Oliver took over in the saddle and gave her an inch-perfect ride to the line to celebrate his 121st career Group 1 success.

Jye McNeil on the brave runner-up Odeum meanwhile was denied his second Group 1 victory with the result going to the inside mare, Shout The Bar lifting late.

It was still a huge performance from the three-year-old runner-up who was beaten the barest margins stepping out against the older mares on the opening day of the Melbourne Cup Carnival.

Rounding out the Empire Rose Stakes trifecta in third was Richard & Michael Freedman’s All Too Hard filly Forbidden Love who was run down late having taken up the lead the 400m before being run down in the final furlong.