Danny O’Brien’s young star Russian Camelot has retained favouritism for the Group 1 $5 million Ladbrokes Cox Plate (2040m) at The Valley on Saturday despite drawing the outside alley for the Australasian weight-for-age championship. 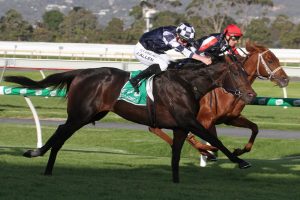 In a final field of 14 plus an emergency, Camelot four-year-old Russian Camelot drew the outside Cox Plate barrier with jockey Damien Oliver chasing his first victory in the iconic Moonee Valley showdown since his success aboard the Fred Kersley-trained Northerly in 2001.

It was dramatic scenes at the official Cox Plate field announcement with the MVRC receiving 15 final acceptances and were forced to make a decision on what horse would miss a confirmed start as the race’s emergency.

In the end it was Ireland’s former Melbourne Cup winning horseman Joseph O’Brien who was left devastated in a shock call from the racing club to not give Buckhurst a guaranteed start.

The Australia entire debuted down under in last weekend’s Group 1 Caulfield Cup (2400m) running 3.4 lengths back seventh to Verry Elleegant, but it wasn’t enough to secure him a position a week later in the 100th edition of the Cox Plate.

“I am in shock and I find it extraordinary to be honest,” part-owner Nick Williams told the media.

“There are a couple of horses there that should be well behind Buckhurst.”

In a move many in the racing industry are scratching their heads over, the 14th spot in the race field went to the Ciaron Maher & David Eustace-trained colt Grandslam.

The three-year-old has had just six starts and his only success was in a Benchmark 66 for two-year-olds at Morphettville back in April.

He caught the eye on October 10 at a huge price when third to Ole Kirk in the Group 1 Caulfield Guineas (1600m) and now gets the chance to take on the best horses in the country at weight-for-age on Saturday with Jye McNeil aboard in gate five.

Grandslam is the only three-year-old in this year’s Cox Plate field and is at current odds of $26 through Ladbrokes.com.au to become the first of that age to win since Shamus Award (2014).

Danny O’Brien prepared Shamus Award for his historical win when the horse became the first maiden to win the Cox Plate and was guided to victory by apprentice Chad Schofield.

Last year’s Melbourne Cup winning trainer is now in with a huge chance to secure his second Cox Plate trophy with the top elect Russian Camelot at an updated price of $4.60.

The past five editions of the Cox Plate have been won by the favourite, a statistic skewed by the historical four-peat of Winx (2015-18).

Wide alleys also haven’t been a disadvantage in recent years with the last three winners saluting from a double-digit barrier including Japan’s Lys Gracieux (11 of 14 in 2019).

SA Derby winner Russian Camelot secured a second Group 1 success this campaign with a second-up victory in the Underwood Stakes (1800m) before going down in a shock loss as the beaten odds-on favourite in the Group 1 Caulfield Stakes (2000m).

After atonement on the weekend in his first Moonee Valley assignment, Russian Camelot will meet his last start conqueror with Arcadia Queen also among the Cox Plate acceptors.

Flying Perth hoop William Pike has the Cox Plate ride on Arcadia Queen looking to continue his dominance in Melbourne this carnival and the mare is at $5 in the post-field markets.

The star Irish horseman won the Cox Plate in 2014 with Adelaide and saddles-up two in the race this weekend with Armory and Magic Wand in barriers six four respectively.

Magic Wand meanwhile is at longer odds of $26, the mare a familiar name to Aussie punters having come off a second in last year’s Irish Champion, the 2019 edition also won by Magical, before her fourth in the Cox Plate results.

After running 10th next up in the 2019 Melbourne Cup Magic Wand then secured a Group 1 victory at Flemington in the Mackinnon Stakes (2000m) but doesn’t look to be going as good 12 months on.

Jamie Richards’ star Kiwi-trained mare Probabeel at $9 rounds out the single-figure fancies in the Cox Plate field chasing a third win on the trot after her good lead-up form at Randwick including a last start Group 1 Epsom Handicap (1600m) success.

Among the other notable acceptors are the likes of dual Cox Plate placegetter Humidor now prepared by Chris Waller of Winx fame and his in-form stablemate Kolding.