Persan has raced his way into the 2020 Melbourne Cup field, the progressive young Ciaron Maher & David Payne-trained stayer too good for his rivals in an eye-catching Group 3 $500,000 The Bart Cummings (2510m) victory at Flemington. 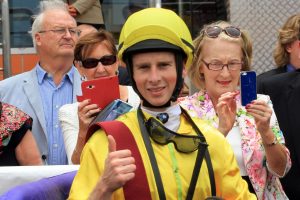 In a brilliant training performance and thanks to a peach of a ride from jockey Jye McNeil, well-bred Pierro four-year-old Persan continued his ultra-consistent form with a gutsy victory on Turnbull Stakes Day securing the $8 million Lexus Melbourne Cup ballot exemption.

“They’ve kept him going the whole way through.

“Proud of the horse. He’s an incredible horse, he’s changed a lot. He’s a much more relaxed horse and that’s taken him a long way.”

A late-season three-year-old originally trained by David Payne in Sydney, Persan only broke his maiden status back in May when second-up for his new stable in Melbourne.

“Really grateful for them to send us the horse down from Sydney,” Eustace added.

“They’re (connections) huge supporters of the game and a bit of a dream is obviously coming true, it’s great.”

The horse has gone from strength to strength since securing a further four wins over a lengthy prep before his breakthrough Group 3 success in The Bart Cummings.

Improving on a lead-up second at the track and distance from September 12, Persan was ridden off the pace in a strung-out field eventually led around by South Pacific from the 2000m.

The speed slackened-off mid-race as the moves began to come from the back, South Pacific doing all the work up front facing the breeze.

Once on the straight, Chris Waller’s favourite Shared Ambition charged down the centre as Michael Moroney-trained Sound and Persan both moved up.

In the end a nice move up the inside from McNeil who took the shortest way home gave Persan ($10) the advantage and he was able to draw away from Sound ($15) for a length victory, while the always-honest Steel Prince ($5.50) finished a close third for Anthony & Sam Freedman.

“The whole way through, we just wanted to get him in a good race with a decent temp and he’s finally got that today,” Eustace said.

“It was a beautiful ride from Jye.”

McNeil has already secured a ride in the Group 1 $5 million Caulfield Cup (2400m) on October 17 aboard the Danny O’Brien-trained Orderofthegarter.

The up-and-coming hoop could also now be in with a chance to ride Persan in the Melbourne Cup 2020.

“We’ve got to get him to stay the two miles now, but he switches off lovely and he’s got tactical speed and he’ll get in on the light weight,” Eustace said.

“It’s great for the whole team. It creates a real buzz around the yard and we won’t mind that there’s no one here to watch it!”

Persan has been slashed in the all-in 2020 Melbourne Cup odds online at Ladbrokes.com.au in from $101 to $34 – markets available in full here.